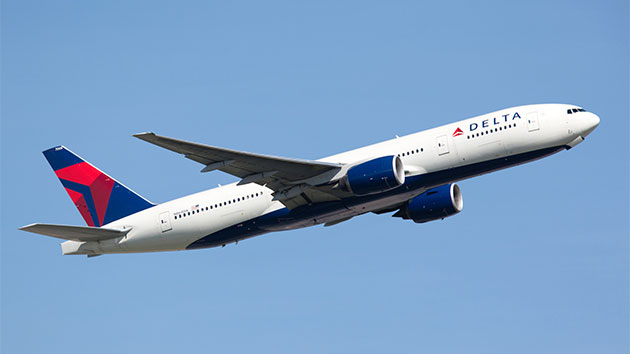 Jetlinerimages/iStock(LOS ANGELES) — A Delta Airlines flight that dumped 15,000 gallons of jet fuel onto multiple people, schools and buildings in the Los Angeles area during an emergency landing is facing a civil lawsuit and violations.Four teachers at the Park Avenue Elementary School were outside with their students last Tuesday when they noticed a plane flying at a very low altitude.”I began to feel drops of jet fuel raining from the sky. My students thought it was rain,” one of the four educators, who requested to remain anonymous, said at a press conference held on Friday by their attorney Gloria Allred. “Then the liquid overwhelmed our eyes, mouths, nose, lungs and skin. My students began screaming and crying because their eyes and skin were burning.”That flight was headed to Shanghai, China, from Los Angeles International Airport when an in-flight emergency occurred and caused the plane to return to the runway.During the landing, the pilot was specifically asked by the Air Traffic Control System Command Center if there was a need to dump fuel in order to lighten the weight. “The pilot replied by saying ‘negative…we’ve got it under control.’ Had the pilot notified (air traffic control), the flight would have been directed to a location and altitude that fuel could be safely dumped,” said Allred, who is suing the airline for negligence.Delta said it is concerned that some students were impacted.”The aircraft landed safely after a release of fuel, which was required as part of normal procedure to reach a safe landing weight,” the airline said in a statement. “We are in touch with Los Angeles World Airports and the LA County Fire Department and share concerns regarding reported minor injuries to adults and children at a school in the area.”The lawsuit also claims that the coating from the fuel caused the victims to feel sick, dizzy and nauseous. It also, according to the suit, caused severe discomfort that required medical attention and severe emotional distress — might produce health consequences in the future.Damian Dovarganes/AP”We are all very experienced teachers, but we are not equipped to deal with this level of hazard and contamination,” the teacher said.Allred expects to add more plaintiffs to the lawsuit and Delta said it’s not commenting more at this time.”I can confirm that we have opened an internal investigation, but will be declining further comment due to pending litigation,” Delta spokesperson Drake Castañeda told ABC News.”As part of its emergency landing, 15,000 gallons of jet fuel in the form of mist was released into the atmosphere impacting multiple areas of Los Angeles” including multiple schools within the Los Angeles Unified School District, the Cudahy Public Library, and two schools within the El Rancho Unified School District, according to a statement by the South Coast Air Quality Management District (South AQMD).South AQMD issued a Notice of Violation to Delta Airlines on Friday for causing a “public nuisance in violation of the agency’s Rule 402 and California Health and Safety Code Section 41700.”If no settlement is reached, a civil lawsuit may ultimately be filed in superior court, the agency said.Authorities said Los Angeles County Fire Department assisted 44 total patients and Los Angeles City Fire Department saw 16 patients, but none were taken to the hospital, authorities said.Copyright © 2020, ABC Audio. All rights reserved.