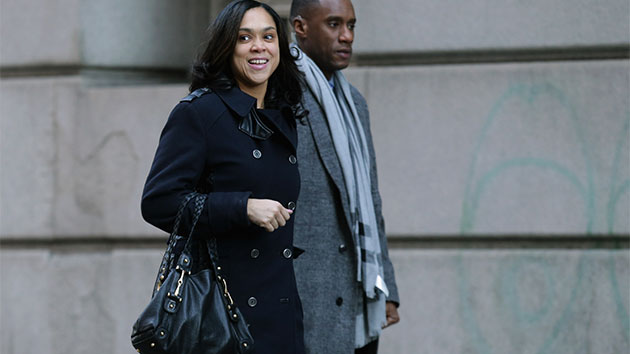 Chip Somodevilla/Getty Images(BALTIMORE) — Days after Baltimore City’s State Attorney Marilyn Mosby rallied around a fellow top prosecutor to speak out about the racially charged attacks they have experienced while in office, she received a 60-second voicemail flooded with “hateful rhetoric.”The anonymous voice started by chastising Mosby for traveling to St. Louis, Missouri, to support St. Louis Circuit Attorney Kim Gardner for filing a civil rights lawsuit against the city and their police union for allegedly coordinating racist conspiracies meant to force her out of office.Mixed with half-recited, profanity-laced proverbs and racially biased opinions, the caller ended the message with a shocking suggestion. “If we’d known you all were going to be this much f—–g trouble, we would have picked our own f—–g cotton,” the caller said.Mosby received the rambling “hateful rhetoric” on Wednesday and posted it on her Twitter page on Thursday to further reiterate why she supported Gardner earlier in the week.

This is why #IStandWithKimGardner and this hateful rhetoric only strengthens my resolve to continue fighting for justice and working to undo the blight of mass incarceration and its impact on communities of color.” #KeepersOfTheStatusQuo pic.twitter.com/GbP8fTjJbH

— Marilyn J. Mosby (@MarilynMosbyEsq) January 16, 2020 Gardner is the first black woman elected as the top prosecutor in St. Louis and the lawsuit appears to mark the first time an elected local prosecutor has brought a federal case against the police union for racially motivated civil rights violations.On Monday, Gardner held a press conference to announce the civil lawsuit she filed in the Eastern District of Missouri and was supported by other leading black female prosecutors from across the country including Mosby.”Quite candidly, Kim, like the others who stand before you today, has challenged the status quo and the keepers of the status quo don’t like that, which is why she is being personally and professionally attacked,” Mosby said the podium on Monday. “Every prosecutor here has had similar experiences to Kim.”Mosby also spoke out about receiving death threats since taking office in 2015, in particular, for indicting six police officers in connection to the death of Freddie Gray, who suffered a catastrophic spinal injury while in custody.A request for comment from Mosby was not immediately received. Copyright © 2020, ABC Audio. All rights reserved.