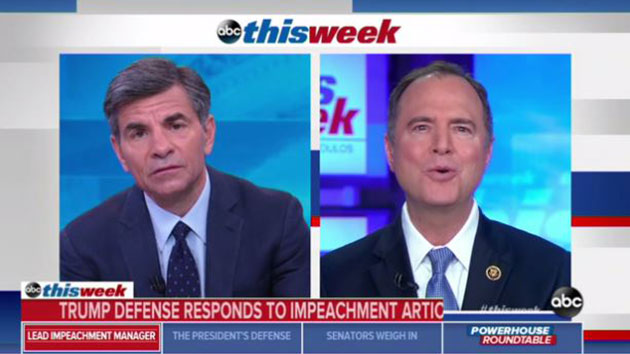 ABC News(NEW YORK) —  Alan Dershowitz, a Harvard professor emeritus who recently joined President Donald Trump’s defense team, made the constitutional case against impeachment in an interview on ABC’s “This Week” Sunday.It’s an argument that he said was successfully argued in President Andrew Johnson’s impeachment trial.”When you read the text of the Constitution, treason, bribery or other high crimes and misdemeanors, ‘other’ really means that crimes and misdemeanors must be akin — akin to treason and bribery,” he told ABC News Chief Anchor George Stephanopoulos.In a separate interview on “This Week” the lead House impeachment manager, Rep. Adam Schiff, called Dershowitz’s argument “absurdist.””You had to go so far out of the mainstream to find someone to make that argument,” Schiff told Stephanopoulos. “You had to leave the realm of constitutional law scholars and go to criminal defense lawyers.”Dershowitz said that calling the argument absurdist is “to insult one of the greatest jurists in American history,” referring to Justice Benjamin Curtis, who first made the argument in Johnson’s impeachment trial.”The argument is a strong one, the Senate should hear it. I am privileged to be able to make it,” he said. “I have a limited role in the case. I’m only in the case as of counsel on the constitutional criteria for impeachment.” Dershowitz argued that the president should not be impeached, even if House managers prove their case for abuse of power and obstruction of Congress. When Stephanopoulos pressed Dershowitz about whether it was okay for the president to solicit foreign interference in an election, he said that was not his concern.”If the allegations are not impeachable, then this trial should result in an acquittal, regardless of whether the conduct is regarded as OK by you or by me or by voters,” he said. “That’s an issue for the voters.”Almost a month after the House voted for two articles of impeachment against President Donald Trump, the Senate impeachment trial formally began on Thursday. House managers outlined their formal case against the president in an 111-page brief filed with the Senate on Saturday night. In the filing, House managers argue that “the facts are indisputable, and the evidence is overwhelming” that the president abused his power by seeking foreign interference in an election and followed that action by obstructing a congressional investigation.”Senators must accept and fulfill the responsibility placed on them by the Framers of our Constitution and the Oaths they have just taken to do impartial justice,” the brief said. “They must conduct a fair trial — fair to the President and fair to the American people.”On “This Week,” Schiff made the case for having witnesses in the trial.”If the Senate decides — if Senator McConnell prevails and there are no witnesses, it will be the first impeachment trial in history that goes to conclusion without witnesses,” he said.Dershowitz said that the Constitution doesn’t speak to whether or not there need to be witnesses in an impeachment trial. However, he also said that if witnesses are allowed, it could cause a delay.”The one thing that’s very clear is that if witnesses are permitted on one side, they have to be permitted on both sides,” Dershowitz said. “And if witnesses are permitted, it will delay the trial considerably, because the president will invoke executive privilege as to people like (former national security adviser) John Bolton that will have to go to the court and we’ll have to have a resolution of that before the trial continues.” Following the House Democrats’ filing their brief on Saturday, the president’s lawyers formally responded to the articles of impeachment by reiterating the president’s assertion that he did nothing wrong.”This is a brazen and unlawful attempt to overturn the results of the 2016 election and interfere with the 2020 election — now just months away,” the response from lead counsels Pat Cipollone and Jay Sekulow said. “The highly partisan and reckless obsession with impeaching the President began the day he was inaugurated and continues to this day.”When asked about the brief on “This Week,” Dershowitz did not comment on the merits of the claims made in the response.”I did not read that brief or sign that brief,” he told Stephanopoulos. “That’s not part of my mandate. My mandate is to present the constitutional argument.”Schiff called the president’s formal response to the articles “surprising” because it doesn’t offer more than the “failed arguments we heard in the House.”The president’s legal team will has until noon Monday to submit their full trial brief. Copyright © 2020, ABC Audio. All rights reserved.