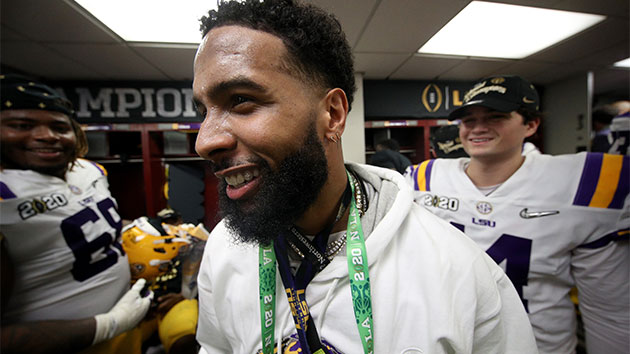 Chris Graythen/Getty Images(NEW ORLEANS) —  A New Orleans security officer who filed a complaint against Cleveland Brown’s wide receiver Odell Beckham Jr. for allegedly slapping him on the buttocks has decided not to pursue the charges.The officer, who works at the Mercedes-Benz Superdome, was seen in a viral video with Beckham, who appears to slap him on his behind in a stadium locker room Monday night.The officer filed a complaint with the New Orleans Police Department on Thursday and an arrest warrant was obtained for a “simple battery” charge.At some point, the officer had a change of heart, telling police on Saturday he didn’t want to pursue the charges, a law enforcement source confirmed to ABC News. Officials then rescinded the arrest warrant.”Absent a complaining witness, this is not a case our office intends to pursue,” said Ken Daley, a spokesman for Orleans Parish District Attorney Leon Cannizzaro.The allegations stemmed from the aftermath of the College Football Playoff National Championship in which Beckham’s alma mater, Louisiana State, was celebrating after defeating Clemson 42-25.Beckham was seen in a video apparently slapping the officer’s behind, at which point he turned around and looked at Beckham, who continued joking around with LSU players and officials.The “simple battery” charge would have been a misdemeanor. Copyright © 2020, ABC Audio. All rights reserved.