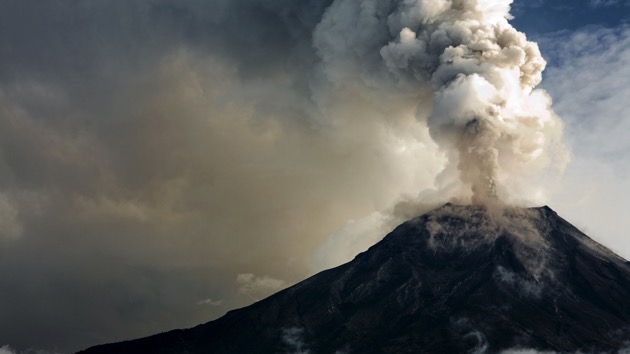 FILE – Kalistratova/iStock(ANCHORAGE, Alaska) — Activity from one of Alaska’s 80 volcanoes triggered aviation warnings after it began to spew ash and lava over the weekend.The Shishaldin Volcano sits near an Aleutian village on an archipelago in southwest Alaska about 700 miles west of Anchorage. It began to resume activity early Saturday morning with visible lava flows and ash shot thousands of feet into the air, according to the Alaska Volcano Observatory.At some points, the ash reached about 28,000 feet, officials said. Trace amounts of the ash landed on False Pass, about 23 miles east of the volcano, the Anchorage Daily News reported.

The National Weather Service issued a warning to pilots in the area due to the activity.The ash stopped around 8:30 p.m. local time Sunday, according to the observatory. The volcano has been erupting periodically since the summer, with the most recent activity reported earlier this month.Shishaldin is among the most active volcanoes in the area, with about 24 confirmed eruptions have occurred since 1775, according to the local newspaper.The observatory current has the volcano listed at a Code Orange alert level, indicating that the volcano is “exhibiting heightened or or escalating unrest with increased potential for eruption.”Copyright © 2020, ABC Audio. All rights reserved.

‘Our environment shapes us’: Ojibwe architect Sam Olbekson designs from an Indigenous perspective