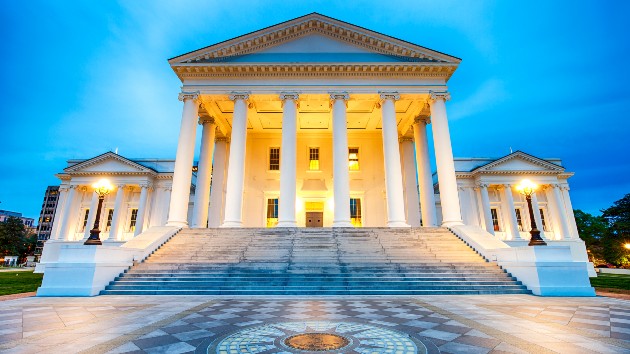 traveler1116/iStock(RICHMOND, Va.) — Armed with rifles, tactical gear and homemade posters, thousands of gun rights activists hit the streets of Richmond, Va., Monday to protest the state’s proposed gun control laws.Lobby Day went off with no major violent incidents in the morning despite threats from armed militias and white supremacist groups that led Gov. Ralph Northam to declare a state of emergency and ban weapons from Capitol Square.Gun rights groups, such as the Virginia Citizens Defense League and Gun Owners of America, spoke out against the proposed ban on assault rifles, a “red flag” law, which would give officials the power to confiscate weapons from an individual who poses a threat, and other gun control measures that the newly Democratic-led state legislature introduced.“We will not comply,” protesters shouted.The armed activists stayed outside of the Capitol grounds, where all weapons are banned until Tuesday night, while their unarmed members held their rally outside of the legislative building. On Monday, police will not be separating counter-protesters within the fenced area in Capitol Square, officers told ABC News.On Wednesday, Northam issued a state of emergency and banned all weapons from Capitol grounds from Friday until Tuesday night. Northam said he had received credible intelligence that hate groups and militias were planning violent attacks in Capitol Square that mirrored the ones seen before the 2017 Charlottesville “Unite the Right” rally where three people were killed.”They are not coming to peacefully protest, they are coming to intimidate and to cause harm,” the governor said at a news conference.Gun rights supporters tried to block the state of emergency, arguing that it infringed on their right to rally; however, a judge denied their motion and their subsequent appeal before the ban went into effect Friday evening.The Virginia Citizens Defense League has asked its members to obey the state of emergency. But the group said those who plan to attend Lobby Day and protest outside the protected areas should come armed.”For every one gun owner on the Capitol grounds, we need another two to five people outside,” the league said in a statement.President Trump showed his support for the activists on Twitter, writing in a tweet Monday morning, “The Democrat Party in the Great Commonwealth of Virginia are working hard to take away your 2nd Amendment rights. This is just the beginning. Don’t let it happen, VOTE REPUBLICAN in 2020.” He also retweeted a video of the gun rights activists singing “The Star-Spangled Banner.”Virginia’s House Republican leader, however, called for calm and urged all groups attending Monday’s Lobby Day to be peaceful.”Any group that comes to Richmond to spread white supremacist garbage, or any other form of hate, violence, or civil unrest isn’t welcome here,” he said in a statement posted on Twitter.Recent FBI activity highlighted the threats facing Lobby Day. On Thursday, the agency arrested three reputed members of a white supremacy group who were allegedly armed with several weapons and traveling to Richmond “in anticipation of a possible race war,” law enforcement sources told ABC News.A spokesperson for the FBI’s Richmond field office on Sunday told ABC News in a statement: “In response to a request for assistance from the Virginia Division of Capitol Police, FBI Richmond has been working with our local and state law enforcement partners in relation to threats of violence at the rally on January 20, 2020. We will provide assistance as deemed appropriate to ensure public safety.”State, Capitol and Richmond police said they will have a strong presence in Capitol Square and will set up checkpoints to ensure the weapons ban is enforced and everyone is safe.The emergency order is slated to end Tuesday evening, but the gun control debate will continue over the next few months.Northam and Democratic state leaders said they remain committed to enacting new laws that would curtail gun violence in the state. Several Virginia towns, however, have made resolutions declaring themselves “Second Amendment Sanctuaries” and passed resolutions that disavow any state or national gun control measures.Moms Demand Action, the gun control activist group, spent Monday calling Virginians and volunteering throughout the state to bolster support for the bills.”Activism will always supersede extremism,” Shannon Watts, the founder of Moms Demand Action, tweeted.

Gun was used as a weapon in majority of recent mass attacks: US Secret Service