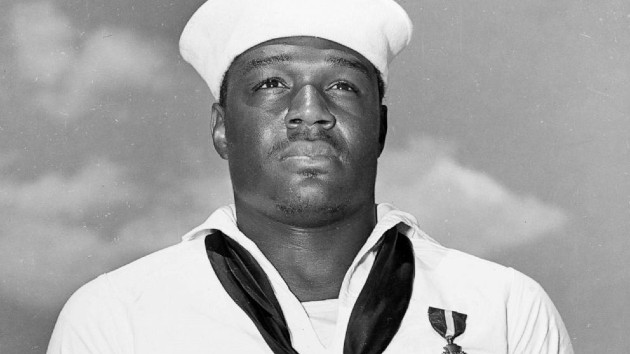 U.S. Navy(NEW YORK) — The U.S. Navy is set to announce Monday that a future aircraft carrier will be the first named in honor of an African American. The ship will be named in honor of Doris Miller, who was serving as a ship’s cook during the attack on Pearl Harbor in 1941, acting Secretary of the Navy Thomas Modly said in a statement Sunday. The announcement is timed to coincide with Martin Luther King Jr. Day.This will be the second ship named in honor of Miller for his actions during the attack on Pearl Harbor on Dec. 7, 1941. When the attack from the Japanese began, Miller was collecting laundry on the West Virginia battleship. Miller headed to his battle station, but found it destroyed by torpedo damage. Miller helped move injured sailors to safety before he was ordered to help the captain of the ship, who was mortally wounded. After that, Miller manned an anti-aircraft machine gun, a weapon he had not been trained to operate, until it was out of ammunition.When the ship was ordered to be abandoned because of fires and flaming oil from another destroyed ship, Miller again helped move injured sailors. Miller’s actions earned a commendation from the secretary of the Navy at the time, which was presented to him by Adm. Chester Nimitz, then-commander of the U.S. Pacific Fleet. “This marks the first time in this conflict that such high tribute has been made in the Pacific Fleet to a member of his race and I’m sure the future will see others similarly honored for brave acts,” Nimitz said at the time.The USS Miller, a frigate, was also named in honor of Miller. Miller also received a Purple Heart Medal, the American Defense Service Medal, Fleet Clasp, Asiatic-Pacific Campaign Medal and the World War II Victory Medal. Miller died in action in 1943 after a torpedo hit the ship he was aboard in the Gilbert Islands. “Doris Miller stood for everything that is good about our nation, and his story deserves to be remembered and repeated wherever our people continue the watch today,” Modly said in a statement.In a press release, the Navy said that the future USS Doris Miller will be the “premier forward asset for crisis response and humanitarian relief, and early decisive striking power in a major combat operations.” Modly is expected to officially announce the naming of the future Gerald R. Ford-class aircraft carrier at a ceremony in Pearl Harbor, Hawaii.