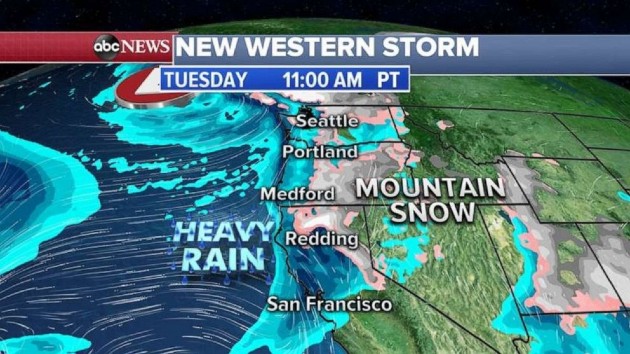 ABC News(NEW YORK) — January is in full swing in the eastern half of the United States where temperatures and wind chills are below zero in the Northern Plains and New England. The arctic air spills all the way into the Mid-South where the wind chill is in the teens in Atlanta and Memphis, Tennessee Monday morning.By Monday night into Tuesday morning, the coldest air moves into central Florida where wind chill alerts have been issued and there are wind chills in the 30s in Orlando. After this cold blast in the East our attention turns to a new cross-country storm that’s forecast to move from West to East this week with snow, ice and rain. On Monday morning, the storm is still developing in the Pacific Ocean. By Tuesday morning, the storm system will move into the west with heavy rain from Seattle to San Francisco and heavy snow in the mountains.Already ahead of the storm, a Winter Storm Watch has been issued for parts of California where 1 to 2 feet of snow is possible. This western storm will cross the country and should bring rain, snow and ice to Midwest and the Northeast by the end of the week. Copyright © 2020, ABC Audio. All rights reserved.

What you need to know about critical minerals and climate change