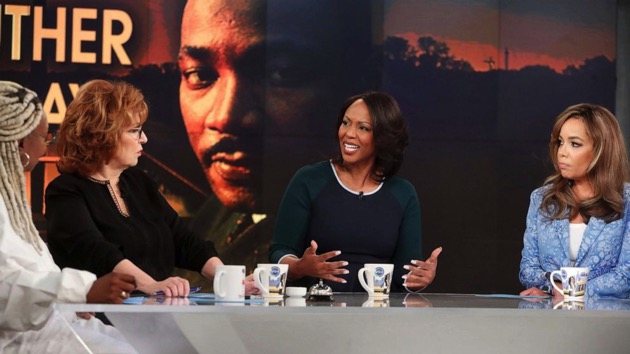 Maya Rockeymoore Cummings, the widow in Rep. Elijah Cummings, talks to the hosts of ABC’s “The View,” for Martin Luther King Day, Jan. 20, 2020. – (Lou Rocco/Walt Disney Television)(WASHINGTON) — Maya Rockeymoore Cummings, the widow of late Maryland Rep. Elijiah Cummings, paid tribute to her husband on ABC’s The View on Martin Luther King Jr. Day, lauding his lifelong battle to secure democracy and promote equality.“He was a very empathetic man,” Rockeymoore Cummings told the hosts. “He grew up in a segregated Baltimore, so he knew what it was like for Americans’ history of hatred to influence and depress the opportunities for a whole generation of people just because of skin color.”She added, “He was determined that he was going to live his life in a way that opens doors for everyone.”Cummings, who passed away on Oct. 17, represented the Baltimore area in Congress and was the chairman of the powerful House Oversight Committee. He was also a key player in the beginning stages of the impeachment inquiry of President Donald Trump.His involvement in the House Democrats’ impeachment probe attracted sharp criticism from Trump, who once attacked the congressman and Baltimore on Twitter, calling the city “a disgusting rat and rodent infested mess.””It hurt him deeply. And it hurt him at his worst moment,” Rockeymoore Cummings told The View hosts in response to the tweet. “Elijiah was already battling health issues, so to have the president come out and do this at that time, it really depressed him and it stressed him and I think it undermined his health.”Before his passing, Cummings’ told his fellow lawmakers and the public that his support of impeachment wasn’t about “disliking the president,” but about “loving democracy.” Co-host Whoopi Goldberg even said he was known as the conscience of Congress.Rockeymoore Cummings reminded the hosts that she’s working on her campaign to fill the vacant congressional seat left open by her husband. She stepped down from her position as chairwoman of the Maryland Democratic Party in November, after announcing her plans to run, saying it is now her job to continue his legacy for justice.”People are rising up all across the country. They are saying that ‘we will not be oppressed,"” Rockeymoore Cummings said, adding “We have hordes of women who are running to take office… I am a part of that vanguard of people who are seeking to build on the legacy left by Elijiah Cummings.”Co-host Meghan McCain called on Rockeymoore Cummings for her internal strength.”I don’t think I could have run for anything three months after my father died,” said McCain, the daughter of the late Arizona Sen. John McCain, adding “Was Elijah supportive?””Absolutely,” Rockeymoore Cummings said, explaining that she and the vigorous congressman were a team from the start, fighting together for a long time.”Elijiah met me on Capitol Hill, I was already in the fight,” Rockeymoore Cummings told the hosts. “We fought together for a very long time, and he expected me to continue the fight. On several occasions he told me that he thought I should run for his seat.”At the time, she said she told him that she didn’t want to think about that, because that would mean Cummings — who began his fight for civil rights at just 11 years old — would be gone.The conversation then turned to her health and preventative measures she’s taken to ensure she can continue to fight for his legacy.She told the hosts that she got a double mastectomy to slow or delay breast cancer, which runs in their family — and claimed her mother’s life in 2015.The Democratic field to fill Cummings’ seat is a crowded one: 24 candidates are in the running thus far.Rockeymoore Cummings’ step-daughters announced their endorsement of Harry Spikes, Cummings’ longtime aide on Capitol Hill, in early December.Kweisi Mfume, the former president of the NAACP — who previously held the seat — also announced he would compete to return to Congress.Cummings was the first African American to lie in state at the Capitol. His ceremony was attended by many, including former presidents Barack Obama and Bill Clinton.The special primary election to fill his seat is slated for Feb. 4.The special general election will be held on Apr. 28, the same day as Maryland’s 2020 primary election.Copyright © 2020, ABC Audio. All rights reserved.