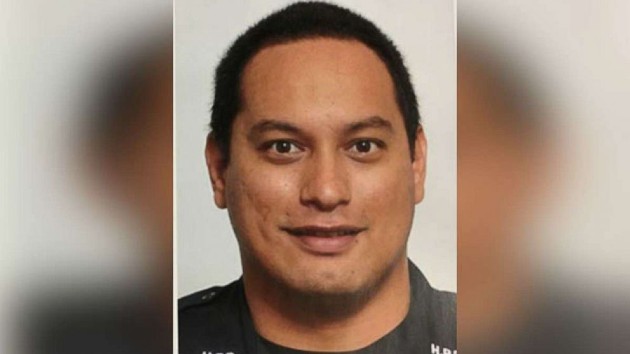 Honolulu Police Department(HONOLULU) — Two officers have died after a shooting on Sunday near one of Hawaii’s most scenic spots, Diamond Head, where several homes were also set ablaze, officials said. The incident unfolded at a home near the Honolulu tourist destination when authorities were responding to a domestic violence call, officials said.Honolulu police responded to reports of a woman who was stabbed in Waikiki when the officers arriving on scene came under fire from the suspect. Police believe the suspect, who may have been using an AR-15-style rifle, is dead, but they have yet to confirm that due to the fire. The two police officers were identified as Tiffany Enriquez, a seven-year veteran, and Kaulike Kalama, a nine-year veteran. Both were wearing bulletproof vests, but were hit above them, police said.Hawaii Gov. David Ige confirmed the officers’ deaths on Twitter. “Our entire state mourns the loss of two Honolulu Police officers killed in the line of duty this morning,” Ige wrote. “As we express our condolences to their families, friends and colleagues, let us also come together to help and support those who have been forever changed by this tragedy.”Police said in addition to the suspect, two other people are also unaccounted for from a house that burned to the ground. The suspect has been identified as Jerry Hanel, who is in his 60s. Police said they will continue searching for the suspect until his remains have been recovered. Seven homes were totally destroyed in the fire and others suffered smoke damage, officials said.Honolulu Mayor Kirk Caldwell shared condolences on Facebook: “I would like to express my deepest condolences to the family and friends of the two officers as well as the entire Honolulu Police Department. This is an unprecedented tragedy for not only the City and County of Honolulu but the entire state of Hawai’i.” The FBI has sent agents to the scene, ABC News has confirmed. The federal Bureau of Alcohol, Tobacco, Firearms and Explosives tweeted that its agents are “responding to the active shooter situation in Honolulu.”Cellphone video posted on Twitter by a reporter from Honolulu ABC affiliate KITV showed police cars and ambulances swarming a neighborhood near Kapiolani Park, about 2 miles from Diamond Head Beach Park. Smoke could be seen in the video coming from several homes.Hawaii Rep. Tulsi Gabbard, who is also running for president, said on Twitter, “While we all mourn the heartbreaking loss of two of Honolulu’s finest, their fellow first responders are still out there. Our prayers are with the families of the officers we lost, and with first responders still working to keep our communities safe.”The incident comes about a month after a 22-year-old active-duty sailor opened fire on three civilian employees, killing two, before he fatally shot himself at the Pearl Harbor Naval Shipyard near Honolulu.