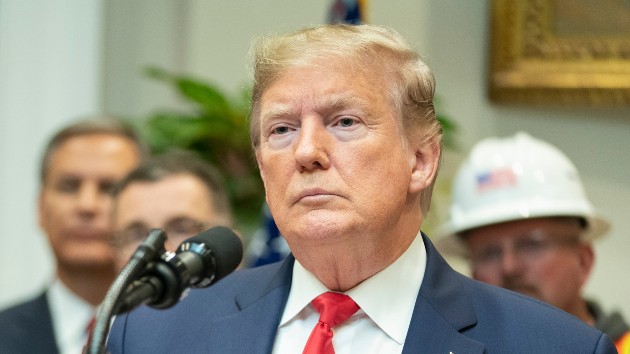 Official White House Photo by Shealah Craighead(WASHINGTON) — Paul Rosenzweig, the former senior counsel to Ken Starr, who led the Whitewater investigation into former President Bill Clinton that resulted in Clinton’s impeachment, slammed President Donald Trump’s defense going into his Senate impeachment trial as being akin to the “scream of a wounded animal” and “a raging against the tide.””At this point, I see President Trump’s response to the impeachment as completely outside of the box of normal discussion,” Paul Rosenzweig said on the latest episode of ABC News’ “The Investigation” podcast on Tuesday.

[ READ THE FULL TRANSCRIPT OF ROSENZWEIG’S INTERVIEW ON “THE INVESTIGATION” ]

The first impeachment trial in more than 20 years is expected to kick into gear this week with the first oral arguments from both Democrats and Republicans in front of all 100 U.S. Senators, who will hear evidence and deliberate as jurors over the coming weeks. In briefs filed on Monday, the president’s high-powered legal team blasted the impeachment as a “brazenly political act by House Democrats” and called on senators to “speedily reject” the charges.The House impeachment managers, who are tasked with arguing in favor of Trump’s removal from office, have asserted that “despite President Trump’s stonewalling of the impeachment inquiry, the House amassed overwhelming evidence of his guilt.” “I would have thought that the allegations against the president would have actually merited serious consideration by the Senate and by Republicans in the House,” Rosenzweig continued. “But apparently we are going to reduce impeachment to nothing more than…a partisan fight over a highway bill, and it should be something more.”While the rules set to govern the Senate trial remain largely opaque, Senate Majority Leader Mitch McConnell and other Republicans have advocated for the same set of standards Clinton faced more than two decades ago. Democrats, however, have repeatedly noted that witnesses were subpoenaed and testified during the Clinton trial — McConnell has signaled a simple-majority vote over whether to call witnesses could go up in the Republican-controlled chamber once the trial starts.Rosenzweig, who’s now a resident senior fellow of national security and cybersecurity at the conservative think tank R Street Institute, laid out other distinctions between the Clinton era and now, too. “I don’t think that the comparison to the Clinton model is very apt at all,” Rosenzweig said. “Bill Clinton himself testified before the grand jury and even went so far as to give DNA evidence. Today, by contrast, the House investigation was stymied at every turn by President Trump, who has turned over almost no documentation at all, who tried to stop every witness from testifying [and] who did not testify himself and refused to do so.” “The comparison, I think, is apples to clouds,” Rosenzweig added. Starr, the independent counsel behind the Whitewater investigation, now stands on the defense side of an impeachment battle. Last week, the White House announced he would be representing the president as defense counsel. The Whitewater investigation ultimately turned up evidence of Clinton’s affair with Monica Lewinsky, the fallout from which led Congress to pass articles of impeachment against Clinton in 1998.Rosenzweig said Starr’s appointment as defense counsel in the impeachment trial will set him at odds with arguments he made more than 20 years ago in Clinton’s case. Notably, in his report to Congress, Starr called the White House efforts to invoke executive privilege for senior aides “patently groundless.” “I don’t see [Starr’s] current position as consistent with the arguments he made about Clinton. So I assume he’s changed his mind,” Rosenzweig said.Rosenzweig also took issue with a legal position taken over the weekend by another of the president’s defense attorneys, Alan Dershowitz, who made the case on Sunday’s This Week with George Stephanopoulos that impeachable “high crimes and misdemeanors” — outlined in the U.S. Constitution — constitute “criminal behavior.” “It’s really hard to take Professor Dershowitz seriously. I’m sorry, but what he’s saying is essentially nonsense,” Rosenzweig said. “If you read the record of the framing of the Constitution, the entire thrust of what the founders were opposed to was abuses of power.”Setting aside the legal stipulations expected at the Senate trial, Rosenzweig concluded that one element of the president’s defense strategy is already set in stone: speed. “I think their strategy is very simple: to move as fast as they can because they know they have the votes, avoid as much evidence as possible [and] don’t engage on the facts because the facts don’t really support them,” he said. Regardless of the outcome, Rosenzweig anticipated that the events in the coming weeks will be seen as “a watershed moment in American history.” Copyright © 2020, ABC Audio. All rights reserved.

How does the Biden classified documents matter compare to Trump’s?