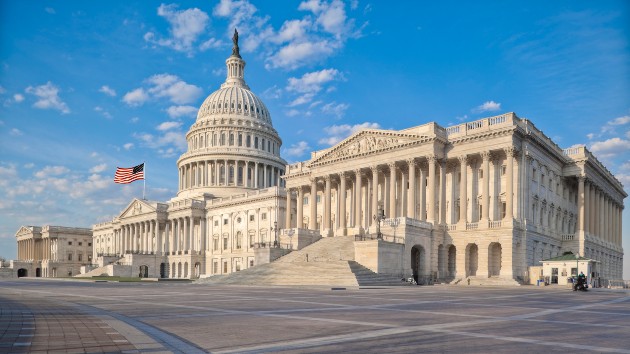 drnadig/iStock(WASHINGTON) —1:34 p.m. Schiff says Trump is arguing there is nothing Congress can do about his conductHouse Intelligence Chairman Adam Schiff makes his first remarks in Tuesday’s session, speaking on behalf of the House impeachment managers against McConnell’s resolution.He says Trump is arguing that there is nothing Congress can do about the behavior in question in the trial and the trial won’t be fair if both sides are blocked from introducing new evidence.”If a president can obstruct his own investigation, if he can effectively nullify a power, the Constitution gives solely to Congress and indeed the ultimate power, the ultimate power the Constitution gives to prevent presidential misconduct, then the president places himself beyond accountability, above the law,” Schiff says.”It makes him a monarch, the very evil which against our Constitution and the balance of powers the Constitution was laid out to guard against,” he says.1:20 p.m. Senate considers rules resolution that now calls for 24 hours of arguments over 3 daysWith Chief Justice John Roberts presiding, the Senate begins considering the rules resolution proposed by McConnell that Democrats strongly object to as unfair.The trial resumed at 1:17 p.m. after being scheduled to resume at 1 p.m.In a major change, the proposed rules would now allow each side to make their case in a total of 24 hours over three — not two — days.

12:25 p.m. Key GOP senators say they’re on board with McConnell’s proposed rulesHeading in their weekly closed-door GOP lunch, key senators Mitt Romney of Utah and Lisa Murkowski of Alaska say they’re on board with the McConnell’s rules resolution, both indicating that it looks the same to them as the Clinton trial rules resolution.Romney calls the difference between the Trump trial and Clinton resolutions “insignificant,” while Democrats have said there are major differences, accusing Republicans of using the rules to engineer a “cover-up.”“You’ll get what you need in eight-hour blocks or 12-hour blocks,” Romney says, referring to the length of each of the two days Democrats would have to present their case.Murkowski echoes Romney, saying,“It’s the same 24 hours (as in Clinton), so what’s the difference if it’s eight hours or 12?”– ABC’s Trish Turner and Devin Dwyer

11:31 a.m. Schumer says McConnell’s proposed rules will force debate into the ‘dead of night’Ahead of the Senate trial, Minority Leader Chuck Schumer sharply criticizes the procedural rules outlined by McConnell Monday night.Schumer takes issue with provisions he says would force debate into “the dead of night” and warns GOP moderate senators he will forces an initial vote on whether to allow senators to review documents and question witnesses.“Right off the bat, Republican senators will face a choice about getting the facts or joining leader McConnell and President Trump in trying to cover them up,” Schumer tells reporters.“A trial with no evidence is not a trial at all. It’s a cover-up,” Schumer says.“This is a historic moment,” Schumer adds. “The eyes of American are watching. Republican senators must rise to the occasion.”When asked if he plans to force votes to oppose McConnell’s decision to split the 24 hours designated for opening arguments over two days, Schumer says “wait and see.”– ABC’s Mariam Khan10:15 a.m. House managers complain about proposed trial rulesAbout three hours before they will appear on the Senate floor, House impeachment managers, led by House Intelligence Chairman Adam Schiff, hold a news conference to complain about McConnell’s proposed rules, which would give them 24 hours over just two days or present their case, possibly meaning their arguments going past midnight.”This is a process where you do not want the American people to see the evidence,” Schiff says.”We could see why this resolution was kept from us and the American people,” he says, calling it “nothing like” the Clinton resolution in terms of both witnesses and documents.“It does not prescribe a process for a fair trial and the American trial desperately want to believe that the Senate … will give the president a fair trial.”Without documents, Schiff said, you can’t determine which witnesses to call and what to ask them.He was joined by the full managing team.He also said McConnell is “compressing the time of the trial,” citing the extended 12-hour days for arguments.Schiff says managers will appeal to the senators today to “live up to the oath that they have taken.”Rep. Jerry Nadler, the House Judiciary Committee chairman, who along with Schiff, will take the lead for the Democrats. Nadler said “there is no other conceivable reason the deny witnesses.”Nadler adds that all the Senate is doing is to “debate whether there will be a cover up,” accusing Republicans of “being afraid of what the witnesses will say.”Schiff wouldn’t say if the House would use all 24 hours for their arguments and a full 12 hours each day but said that should be up to the House, and not the Senate in the trial rules.– ABC’s Benjamin Siegel9:19 a.m. House managers claim “ethical questions” about White House counsel CipolloneHouse managers send a letter to a member of Trump’s legal team Tuesday morning stating that he was a “material witness” to the impeachment charges brought by the House. The managers, led by Schiff, claim there are “serious concerns and ethical questions” surrounding White House counsel Pat Cipollene’s role as Trump’s top impeachment lawyer.“You must disclose all facts and information as to which you have first-hand knowledge that will be at issue in connection with evidence you present or arguments you make in your role as the President’s legal advocate so that the Senate and Chief Justice can be apprised of any potential ethical issues, conflicts, or biases,” the House managers write in a letter to Cipollone.ABC News reported Friday that Cipollone would continue to lead the president’s defense through the impeachment trial along with the president’s personal lawyer, Jay Sekulow.They’re joined on Trump’s defense team by former independent counsel lawyers Ken Starr and Robert Ray who were both involved in investigating and prosecuting the impeachment case against President Bill Clinton.– ABC’s John Parkinson

For a president who likes a good show and seems to thrive on chaos, the opening of his impeachment trial Tuesday could give him exactly that. Sources on Capitol Hill expect the first full day of the trial to be something of a political food fight. At the heart of that debate is whether or not to call witnesses who Democrats claim have first-hand knowledge of the president’s alleged pressure campaign against UkraineRather than the staid proceedings of Bill Clinton’s impeachment trial in 1999 — which followed a close script known to the public, with opening arguments by the House impeachment managers — the choreography of President Donald Trump’s trial is something of a question mark that could see the chamber, known for its decorum and heady debate, run entirely off script, if not off the rails. Ahead of Tuesday’s trial, sources close to the president’s legal team argued the articles of impeachment against Trump are “deficient on their face” because they fail to state any violation of law.In the 110-page trial brief, lawyers for the president rejected the articles as a “brazenly political act” and argued that even if the president did raise the issue of the Bidens and/or Burisma in the course of engaging with Ukraine, there would be nothing wrong with that so long as the president was seeking to advance the public interest. “Importantly, even under House Democrats’ theory, mentioning the matter to President Zelenskyy would have been entirely justified as long as there was a basis to think that would advance the public interest. To defend merely asking a question, the President would not have to show that Vice President Biden (or his son) actually committed any wrongdoing,” the brief argues. For now, much of what will happen Tuesday hinges on how long this political slugfest continues. A senior administration official predicted it is “highly unlikely” opening arguments happen Tuesday, and that could complicate the push by GOP leaders and the White House to compress the schedule.However, the White House has said it’s “extraordinarily unlikely” the trial goes beyond two weeks. Once Chief Justice John Roberts gavels the trial to order, and the opening prayer is given by Senate Chaplain Barry Black and impeachment proclamation by Sergeant at Arms Michael Stenger, Senate Majority Leader Mitch McConnell is expected to make a motion to take up his majority-only resolution that lays out the guidelines for the first phase of the trial. The McConnell measure, released Monday night, condenses opening arguments by the managers and Trump lawyers to 24 hours each over two days per side, followed by up to 16 hours of questioning, via written special submissions by senators. Democrats say a setup involving 12-hour days amounts to GOP efforts to “conceal” the president’s alleged misconduct by conducting the trial in the “dead of night” when the American public is less likely to be paying attention.On the crucial issue of whether or not to call witnesses, senators will vote up or down — after the questioning period — immediately following a four-hour period of debate on the issue. Key GOP senators, like Susan Collins of Maine and Utah’s Mitt Romney, who have expressed interest in subpoenaing certain witnesses, insisted that this language be included. “If the Senate votes no at that point, no party or Senator will be permitted to move to subpoena any witness or documents. If the Senate votes yes, both sides will be free to make motions to subpoena witnesses, and the Senate can debate and vote on them,” according to a senior Senate GOP leadership aide. Democrats were riled up by the GOP leader’s exclusion of evidence not in the record at the time of the Dec. 18 House impeachment vote. It appears that any evidence related to Lev Parnas, a key associate of Trump personal attorney Rudy Giuliani, would not be permitted.Parnas has been turning over evidence to congressional investigators that he argues is pertinent to their impeachment investigation. Democrats, who have been releasing the evidence publicly, argue that Republicans saying no new evidence should be included is “completely out of sync with how trials are done” and say any evidence that is in the public record should be considered. “Impeachment rules do not automatically admit evidence from the House into the Senate trial,” said a senior Senate GOP leadership aide. “This is an important fact specific to this trial because the White House was denied due process throughout the 12 weeks of partisan House proceedings.”Democrats are expected to try to amend McConnell’s trial rules with a request for witnesses and documents, according to sources familiar with their plans. But because of impeachment rules, no senator is allowed to debate anything in public. That leaves the debate before cameras to both the House managers and the newly minted Trump legal team. Each side would likely get up to an hour to speak. It will be the first time the public will see both sets of opponents on the Senate floor, seated at tables specially arranged for the occasion. “We are going to demand votes — yes or no, up or down — on the four witnesses we’ve requested and on the three sets of documents we’ve requested. … Make no mistake about it, we will force votes on witnesses and documents,” Sen. Democratic Leader Chuck Schumer, D-N.Y., said in a press conference Sunday evening.”It’s going to be total chaos. No one knows what they’re doing,” said one former Senate aide with experience in impeachment trials. McConnell’s resolution is expected to include time for a motion to call witnesses after senators have had a chance to ask their questions of both sides, Sen. John Cornyn, R-Texas, confirmed. This was important to middle-of-the-road GOP senators like Collins and Alaska’s Lisa Murkowski, as well as Romney. Collins signaled in a statement Thursday night that she is “likely” to support calling witnesses.