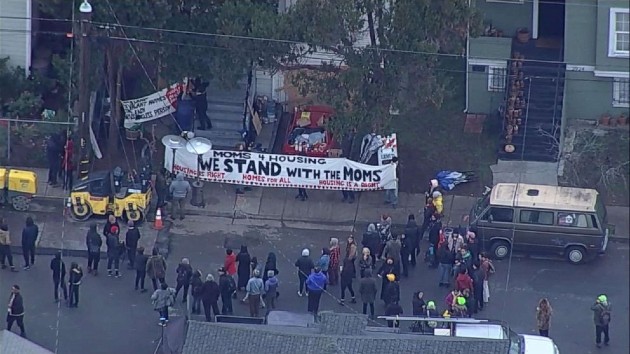 KGO-TV(OAKLAND, Calif.) — A deal struck by a property investment firm involving a vacant California home where two homeless mothers and their children had been hunkered down exemplifies the need for elected officials in large, expensive cities to help provide affordable housing, advocates say. Oakland resident Dominque Walker, 34, her two children and another mother and her five children moved into a vacant three-bedroom home on Magnolia Street in west Oakland on Nov. 18, Walker told ABC News. The families were evicted Jan. 12 after refusing to leave despite an order issued by an Alameda County judge for them to vacate. On Monday, the advocacy group Moms 4 Housing reached a deal to buy the home from Wedgewood Properties, which had purchased it over the summer with the intention of flipping it. Walker told ABC News that for the families, refusing to leave was less about the property itself and more about “the right to housing for all.” “Housing is a human right,” she added.The deal, facilitated by Oakland Mayor Libby Schaaf, is a prime example of how nonprofits, elected officials and community members can work together to help the disadvantaged, said Steve Berg, vice president of programs and policy for the National Alliance to End Homelessness. “If there’s a vacant property in the community, it’s a good thing if the community can get the resources together to buy that housing and use it for people who couldn’t afford housing,” Berg told ABC News.Housing costs are increasing in cities throughout the U.S., and there isn’t enough affordable housing for lower-income residents, Berg said. While the number of modest jobs has increased, the housing supply for those workers hasn’t kept pace, exacerbating the current homelessness crisis, he said. Many without homes still have jobs and families, Berg said.Walker and her children are “the new face of homelessness,” Walker said. The 34-year-old has a degree in sociology from Tougaloo College in Jackson, Mississippi, and works full time as a housing organizer and part time delivering food for Postmates and Doordash. Of the 568,000 people who were homeless on a single night in January 2019, about 172,000 were either children or parents, according to a report recently published by the U.S. Department of Housing and Urban Development. The year in a person’s life when they’re most likely to be homeless is between age 0 and 1, Berg said. More than 150,000 people are homeless in California, a 17% uptick since 2018, according to Cal Matters, a nonprofit news organization.In Oakland, there are four vacant homes for every homeless person, Carroll Fise, director of the Oakland Alliance of Californians for Community Empowerment, told ABC News. Fise added that more than 200% of the current real estate market in Oakland has been a result of development, while less than a third of affordable housing is from development. “Most of the politicians are putting their focus on market rate development, and that’s just out of reach for the working wage,” she said. Fise compared the lack of attention paid to affordable housing to privatizing other essentials to live, such as air and water.The deal between Moms 4 Housing and Wedgewood Properties also involves the firm giving the city, the land trust and other groups first right of refusal on all of its 50 Oakland properties, the property’s spokesman, Sam Singer, told ABC San Francisco station KGO-TV. “What this is going to provide the city of Oakland, along with the disadvantaged, is a pipeline of homes that Wedgewood is going to make available to the city so that it can participate in buying some of them,” Singer told KGO. When asked whether both families will be returning to the home, Walker said the living arrangements have not yet been finalized but that the property will also be used as a place for Moms 4 Housing to organize.The next step for the organization is a meeting with Schaafer and California Gov. Gavin Newsom to discuss policy changes, Walker said. “We want to change policies that allow this to happen in our city and our state,” she said. Last week, Newsom embarked on a five-day tour around Southern California to promote a $1 billion plan to help eradicate the housing crisis. His plan includes using vacant state property to house homeless people.Copyright © 2020, ABC Audio. All rights reserved.