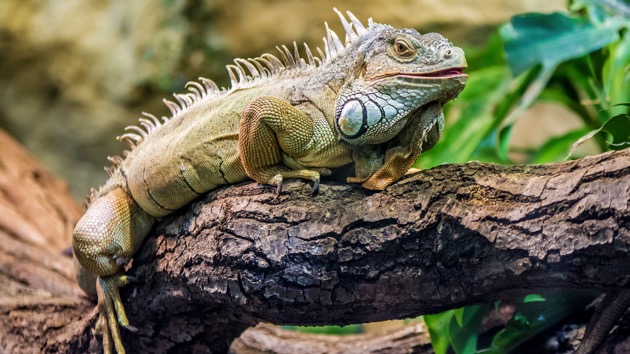 Ralf Geithe/iStock(MIAMI) — As temperatures drop in Florida, so do the iguanas.With lows hitting the 30s and 40s in the Miami area Tuesday night, iguanas have become so cold that they slow down or become entirely immobile and fall from the trees, according to the National Weather Service Miami-South Florida.”This isn’t something we usually forecast, but don’t be surprised if you see iguanas falling from the trees tonight,” a tweet from the National Weather Service (NWS) said.

I can confirm that falling iguanas are a real thing#FloridaWinter pic.twitter.com/AHalTmi8QI

The surprising notice was still in place Wednesday morning.”Definitely not your average day in South Florida this morning,” the National Weather Service tweeted, along with a photo of a fallen iguana.The NWS assured the public that the lizards, which are cold blooded, are not dead.Iguanas are not native to Florida and considered an invasive species, according to the state’s Fish and Wildlife Conversation Commission. They were first reported in the state in the 1960s in Hialeah, Coral Gables and Key Biscayne along Miami-Dade County’s southeastern coast.Social media posts poured in Wednesday morning, as early risers got a first-hand look at the downed iguanas.

Verification of the @NWSMiami iguana warning! That boy ain’t going nowhere… young one couldn’t take it (might be dead) pic.twitter.com/P8d2y3PzIO

⚠️WATCH OUT! ⚠️Here’s proof of cold stunned iguanas. They can fall from trees. Thank you to our Storm Team 5 meteorologist @SteveWPTV for snapping this picture. FYI It’s not dead. @WPTV #FloridaWinter #amcrew pic.twitter.com/fTnajB19rc

Just FYI…. everyone in #SouthFlorida is FREAKING OUT right now.. It’s 40 degrees outside…. feels like 32… and frozen iguanas are falling from the sky. #FrozenFlorida #FloridaWinter pic.twitter.com/Wrc9KvYvko

While cold temperatures continued Wednesday, they have not yet broken any records.The coldest temperature for Jan. 22 was back in 1985, when Miami saw a low of 30 degrees and Fort Lauderdale felt a low of 29 degrees, according to NWS.In the Florida Keys, residents experienced the coldest temperatures in five years, ranging from the low 40s to low 50s.Copyright © 2020, ABC Audio. All rights reserved.