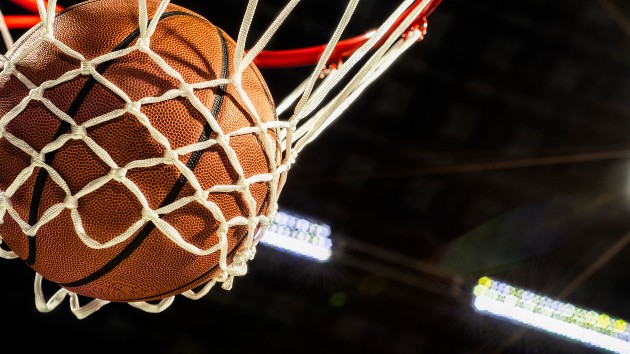 cmannphoto/iStock(NEW YORK) — Tuesday night’s NCAA basketball showdown between rivals Kansas and Kansas State was marred by a bench-clearing brawl in the final seconds that saw players from both sides throwing punches. Kansas had a 22-point lead and was trying to dribble out the clock with just seconds remaining when Kansas State’s DaJuan Gordon stripped the ball from Silvio De Sousa who then chased Gordon down and fouled him as he was attempting a layup.As Gordon lay on the floor, De Sousa stood over him, leading players on both sides to begin pushing and shoving each other. Players poured onto the court as punches were thrown. At one point De Sousa lifted a stool over his head. Coaches and security officers pulled players off the court as referees ejected all the players who had left their benches.”That was an embarrassment on our part, for the role that we played it in” said Kansas coach Bill Self after the game. “There will be consequences that I’m sure I’ll announce tomorrow for that role, as soon as I’m able to study it and come to grips with all of it.” “You win with class and you lose with class,” said Wildcats coach Bruce Weber. “Disappointing that anything had to happen at the end and that’s all I can say. It’s probably my fault but I had told them not to press, not to foul, I told them to back off but the kids are young guys and they want to play hard.” Kansas State was awarded technical free throws after the melee. Kansas ended up with the 81-60 win.