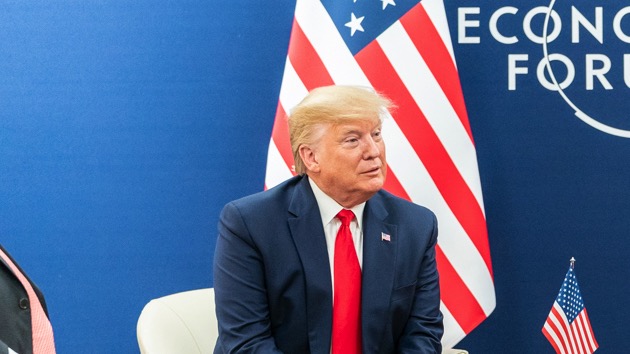 Official White House Photo by Shealah Craighead(DAVOS, Switzerland) — President Donald Trump appeared to brush off the traumatic brain injuries (TBI) and concussion-like injuries sustained by U.S. service members after Iran’s missile strike on a military base in Iraq, saying he did not consider them to be “very serious injuries.””I heard that they had headaches. And a couple of other things,” Trump said Wednesday at a news conference in Davos, Switzerland. “But I would say and I can report it is not very serious.”Trump’s comments drew criticism from veterans advocates who noted that since the height of the wars in Iraq and Afghanistan, the U.S. military and the Department of Veterans Affairs have put in place procedures to treat and lessen the impact of traumatic brain injuries suffered from the blasts from roadside bombs and injuries considered to be the signature wounds of those conflicts.On Wednesday, the U.S. military acknowledged that an additional number of service members had been flown from Iraq to Germany for observation nearly two weeks after the missile attack on the Al Asad airbase. Last week 11 service members were flown out of Iraq for further observation after presenting concussion-like symptoms.When pressed by reporters, Trump continued his claim that the injuries weren’t very serious relative “to other injuries I have seen.””I have seen what Iran has done with roadside bombs to their troops. I have seen people with no legs and with no arms. I have seen people that were horribly, horribly injured in that area, that war. And in fact many cases put those bombs … put there by Soleimani who is no longer with us. And I consider them to be really bad injuries.” Trump said. “No, I do not consider that to be bad injuries. No.”Trump’s remarks also drew swift criticism from veterans groups that have advocated for the victims from violence in Iraq and Afghanistan.Paul Rieckhoff, the founder of Iraq and Afghanistan Veterans of America, tweeted: “The @DeptVetAffairs and hundreds of thousands of post-9/11 veterans disagree: research.va.gov/topics/tbi.cfm Don’t just be outraged by #PresidentMayhem’s latest asinine comments. Take action to help vets facing TBIs: uclahealth.org/operationmend/”

The Centers for Disease Control and Prevention (CDC) defines a traumatic brain injury (TBI) as “a disruption in the normal function of the brain that can be caused by a bump, blow, or jolt to the head, or penetrating head injury.”In addition, service members and veterans potentially have additional exposure to blasts, from combat and from training.TBI injuries have been treated as the “signature wound” and “silent epidemic” of the wars in Afghanistan and Iraq, where insurgents used roadside bombs to significant effect. While the blasts from those bombs caused serious physical injuries to U.S. service members, they also caused a much larger number of TBI injuries that were not immediately visible.According to the VA, the Defense and Veterans Brain Injury Center (DVBIC) “reported more than 408,000 TBIs among U.S. service members worldwide between 2000 and early 2019.”The VA website adds, “The majority of those TBIs were classified as mild.”On Tuesday, U.S. Central Command (Centcom) acknowledged that “additional” service members had been identified as having potential injuries and were transported to Germany for observation.Centcom did not say how many additional service members had been affected beyond the initial 11 reported to have been transferred out of Al Asad last week.Initially there had been no reports of injuries or deaths resulting from the Iranian missile attack on the base, but concussion-like symptoms may take time before they fully present themselves.”Given the nature of injuries already noted, it is possible additional injuries may be identified in the future,” said Captain Bill Urban, a Centcom spokesman.He added, “The health and safety of all service members is the greatest concern for all department leadership and we greatly appreciate the care that these members have received and continue to receive at the hands of our medical professionals.”Copyright © 2020, ABC Audio. All rights reserved.