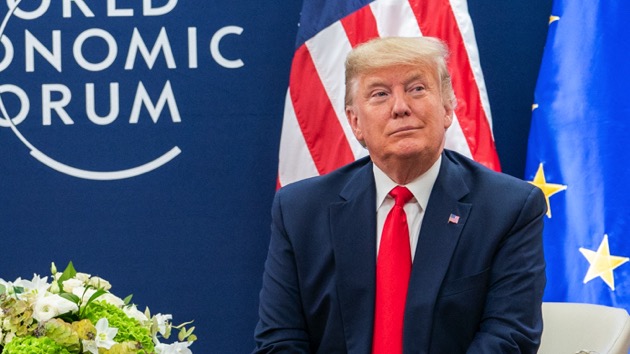 Official White House Photo by Shealah Craighead(DAVOS, Switzerland) — President Donald Trump Wednesday said that while he would prefer to see a lengthy Senate impeachment trial with witnesses, “national security” concerns would probably prevent that from happening.“I would rather go the long way,” Trump said. “I would rather interview Bolton,” he said, referring to his former national security adviser who has said he’s willing to testify at the Senate trial if subpoenaed. “I would rather interview a lot of people.”However, Trump then cited “problems” that he said would likely prohibit Bolton from testifying.”The problem with John, is that it’s a national security problem,” Trump said. “He knows some of my thoughts he knows what I think about leaders. What happens if he reveals what I think about a certain layer and it’s not very positive and then I have to deal on behalf of the country? It’s going to be very hard it’s going to make the job very hard.”He added, “When you have a national security, you could call it presidential prerogative … I call it for national security reasons, executive privilege, they say—so that would john would certainly fit into that.”But potential national security concerns aren’t the only reason Trump has reservations on Bolton testifying. He also noted Bolton’s abrupt departure from the White House in September saying, “you don’t like people testifying when they didn’t leave on good terms.”He said that his break with Bolton was “due to me, not due to him.”The president fired off attacks at Democrats and the impeachment trial while speaking to reporters at a surprise news conference in Davos, Swtizerland, where he spent the previous day meeting with world leaders touting the U.S. economy.He directed specific attacks at House managers Rep. Jerry Nadler, whom he called a “sleazebag,” and Rep. Adam Schiff, whom he labeled a “con job” and a “corrupt politician.”While hurling insults at the impeachment trial and the Democrats arguing against the president, Trump did say that he would “love” to attend his own trial and ““sit right in the front row and stare into their corrupt faces.”Copyright © 2020, ABC Audio. All rights reserved.