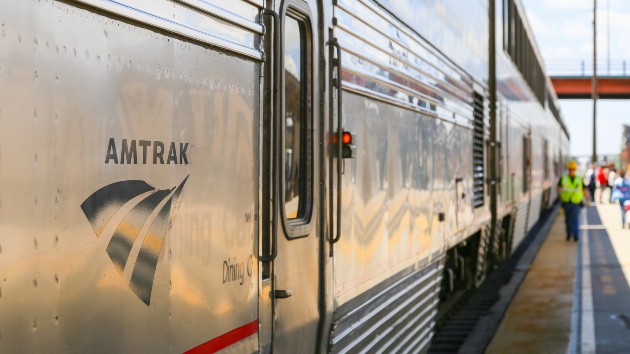 (NEW YORK) — Amtrak officials have apologized and said they’re suspending a policy after two wheelchair users in a group of five passengers were charged $25,000. Five members of Access Living, an Illinois-based nonprofit that advocates for disabled persons, were traveling from Chicago to Bloomington, Illinois, on Wednesday and paid a regular fare of $16, said Bridget Hayman, a spokeswoman for the passengers. Initially, though, when the group bought tickets in December, Amtrak said accommodating two of the five would cost an additional $25,000 because cars would have to be added to the three-car train to accommodate everyone. Typically, Hayman explained, some seats in a car are removed to make room for wheelchair passengers at no additional charge. “It was sticker shock,” she said. “I went back to look at the old bills to see what we were charged, and for seat removal there were no additional charges.”Hayman told ABC News she and her colleagues were grateful Amtrak rescinded the charge but were concerned that it could happen to wheelchair passengers in the future. “There are so many people with disability needs who ride the train, and they’ve been able to take it without any inconvenience in the past,” she added. Members of the group reached out to Amtrak and were told the charges were part of a new policy. No additional details were provided until last week, when the group’s story went public.Amtrak apologized and added three more cars for Wednesday’s trip. “We assured them that as valued customers we will accommodate all passengers who use wheelchairs aboard the same Amtrak trains they originally requested between Chicago and Bloomington-Normal, Ill,” Marc Magliari, a company spokesman, said in a statement. In an additional statement, Amtrak said they were suspending the policy in question. “After further review, Amtrak has determined to suspend the policy in question,” the statement said. “It was never meant to be applied to this situation and we apologize for that mistake. We are glad it has all worked out and we were able to accommodate our customers’ trip. We will do better next time. We are America’s Railroad and we want to provide more trips, not fewer.”Word of the group’s predicament made headway among the disabled community and several prominent activists, including U.S. Sen. Tammy Duckworth, a double amputee, who tweeted out her frustration at Amtrak.”The Americans with Disabilities Act has been the law of the land for 30 years. Yet in 2020, @Amtrak believes it would be an unreasonable burden to remove architectural barriers that would enable a group with five wheelchair users to travel together,” she tweeted. Magliari said Amtrak is planning to meet with the senator to review its policies on accommodations for disabled riders, but couldn’t immediately provide additional details. “It is outrageous that Amtrak asked a group of passengers with disabilities to pay $25,000 to ride from the City of Chicago to Bloomington, Illinois,” Duckworth said in a statement. “It is also disappointing that Amtrak leadership appears to have failed to offer a public apology for its initial mistake.”Copyright © 2020, ABC Audio. All rights reserved.