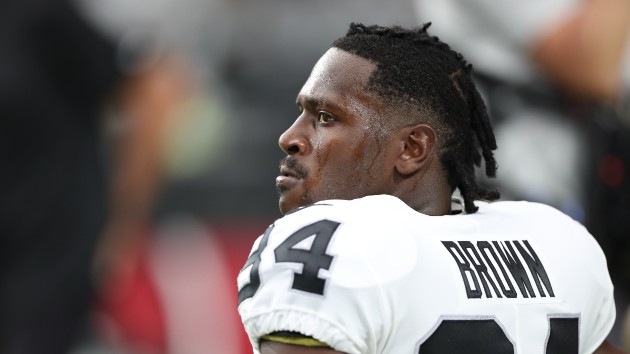 Allen Kee / ESPN Images(HOLLYWOOD, Fla.) — Police issued an arrest warrant for former NFL wide receiver Antonio Brown on Tuesday after he allegedly assaulted a truck driver. Brown, 31, and his trainer, Glenn Holt, were both accused of assaulting a moving truck driver outside of the football player’s home in Hollywood, Florida, on Tuesday over a disagreement about the moving fees. Holt was arrested Tuesday on a felony charge of burglary with battery, according to police. Officers said they attempted to make contact with Brown to question him, but were unsuccessful.The warrant charges the free agent receiver with one count of burglary with battery, one count of burglary of an unoccupied conveyance and one count of criminal mischief. Police said they had been to his home at least four times in the past month due to domestic disturbance calls. Holt’s attorney, Eric Rudenberg, told Miami ABC affiliate WPLG-TV that police claimed there had been a disagreement between movers about some items belonging Brown.The driver was reportedly there to deliver items that Brown had stored in California, but the athlete initially refused to pay the $4,000 fee, according to a police report obtained by WPLG. The driver had attempted to leave with the delivery items still in his truck when Brown allegedly threw a rock, damaging the vehicle, the report said. At one point, Brown allegedly entered the truck’s cabin and began to assault the driver. Holt approached the cab a short time later and attempted to grab the keys to the truck and caused cuts and scratches to the driver, according to WPLG. Holt, 35, was out on bond as of Wednesday evening. His attorney said he intends to plead not guilty. “I’m glad the state attorney’s office was reasonable here and agreed to a bond that my client can afford,” Rudenberg told WPLG. “This is a serious charge, but these allegations are way overblown.”Brown found himself at the center of controversy last year when he asked to be released from the Oakland Raiders after the franchise awarded him a contract that included $30 million in guarantees. He was released by Oakland and later signed with the New England Patriots, but the team cut him in September when a former trainer accused him of rape and sexual assault. Brown’s release from the team coincided with a report in Sports Illustrated that another woman accused Brown of sexual harassment while she was working at his home. Brown’s lawyer has denied the sexual assault allegations. The receiver was a star with the Pittsburgh Steelers for nine seasons, totaling seven Pro Bowl appearances and four first-team All Pro selections. Copyright © 2020, ABC Audio. All rights reserved.