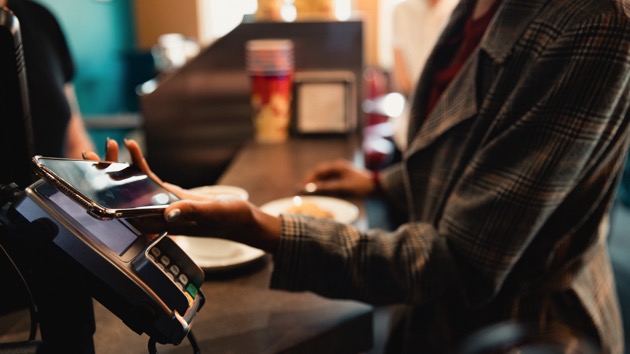 SolStock/iStock(NEW YORK) — Cash will remain king in Big Apple stores and restaurants.The New York City Council will vote Thursday to prohibit businesses from only accepting credit card, debit or digital payments. There were concerns from elected officials that such stores and eateries discriminated against poorer customers who don’t have access to bank accounts, according to city councilman Ritchie Torres, who drafted the bill.”Whatever your reasons, consumers should have the power to choose their preferred method of payment,” he said at a news conference before the vote.The bill, which will take effect 90 days after it is signed, makes it illegal for any store to refuse a cash payment from a customer, but there are a few exceptions. Stores can refuse to take denominations larger than $20, and they would be exempt from the ban if they have a machine on site that can load cash onto a prepaid card.Online and phone purchases would also be exempt from the law, which fines first time violators $1,000.A spokeswoman for Mayor Bill de Blasio said he supports the bill and will sign it into law.Torres said this was a win for the city, especially its working class members. The city’s Department of Consumer Affairs reported in October that nearly 11.2% of New Yorkers have no bank account and roughly 22% of city residents used alternative banking services, such as check cashing stores.”The marketplace of the future must accommodate the needs of vulnerable New Yorkers,” Torres said at a news conference before the vote.The bill had some pushback from some chain stores and small businesses that were cashless. During a hearing on the bill in February, Dos Toros co-founder Leo Kremer said his restaurant chain implemented the policy as a way to keep a tighter control of its finances and help customers get their meals quickly.”We are only interested in being cashless because it allows us to make our restaurant more seamless,” he said.Dos Toros didn’t immediately return messages for comment on Thursday’s vote.Last year Philadelphia, San Francisco and New Jersey passed laws that banned cashless establishments. Massachusetts passed a similar law in 1978. Copyright © 2020, ABC Audio. All rights reserved.