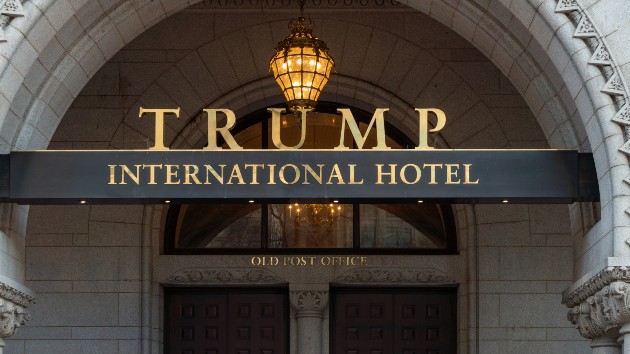 DoraDalton/iStock(WASHINGTON) — President Donald Trump’s inaugural committee abused its nonprofit status by knowingly overpaying for space in the Trump International Hotel in Washington, D.C., in early 2017 as part of an effort to enrich the Trump family, according to a civil lawsuit filed Wednesday by the D.C. attorney general’s office.The attorney general’s office found that Rick Gates, Trump’s former deputy campaign manager, coordinated with members of the Trump family and hotel management to make the payments — which amounted to more than $1 million for the ballroom during four days of the inaugural festivities. In supporting documents filed as part of the case, Gates wrote an email to the president’s daughter, Ivanka Trump, expressing that he was “a bit worried about the optics of [the inaugural committee] paying Trump Hotel a high fee and the media making a big story out of it.” “Although the Inaugural Committee was aware that it was paying far above market rates, it never considered less expensive alternatives, and even paid for space on days when it did not hold events,” the attorney general’s office said in a statement. The Trump Hotel later offered the inaugural committee a reduced rate of $175,000 per day for the ballroom, but D.C. officials said Stephanie Wolkoff, the inaugural committee’s event planning vendor and a friend of first lady Melania Trump, expressed concerns about the exorbitant rate the committee would be paying — and the public perception. “Please take into consideration that when this is audited it will become public knowledge that locations were also gifted and costs underwritten to lower rental fees,” Wolkoff wrote. “I understand that compared to the original pricing this is great but we should look at the whole context.” Wolkoff added that the appropriate maximum rental fee should be $85,000 per day, but the final price was set for $175,000 a day.A spokesperson for the inaugural committee said Wednesday the lawsuit “reads more like a partisan press release than a legal filing” and claimed allegations set forth by the attorney general’s office are “without merit.” “The [inaugural committee] has also received no outreach from the [DC attorney general’s office] since last summer which, when coupled with the obviously suspect timing of the complaint, confirms the completely baseless nature of the allegations,” the spokesperson said. A spokesperson for Trump Hotels said in a statement on Wednesday that “the AG’s claims are false, intentionally misleading and riddled with inaccuracies.” “The rates charged by the hotel were completely in line with what anyone else would have been charged for an unprecedented event of this enormous magnitude and were reflective of the fact that the hotel had just recently opened, possessed superior facilities and was centrally located on Pennsylvania Avenue,” the statement continued. “The AG’s after the fact attempt to regulate what discounts it believes the hotel should have provided as well as the timing of this complaint reeks of politics and is a clear PR stunt.” The Trump inaugural committee has long faced scrutiny from both state and federal investigators. In New York, prosecutors in the Southern District subpoenaed records from the committee last year, according to sources at the time, though no charges have been brought.Trump’s inaugural fund raised $107 million — the most in modern history. The D.C. attorney general, joined by the Maryland attorney general, also sued the Trump Organization in a case accusing the president of illegally profiting from his D.C. hotel. A federal appeals court last year handed the president a victory in the case, dismissing the lawsuit. Last year, the New York attorney general’s office subpoenaed Deutsche Bank and Investors Bank for records related to the Trump Organization projects, including an alleged effort by Trump to inflate his assets to improve his odds of buying the National Football League’s Buffalo Bills, a source familiar with the matter told ABC News. The subpoenas came after the president’s former personal attorney and fixer Michael Cohen’s testimony before Congress that accused his former boss of the gambit that eventually failed. The Manhattan District Attorney’s office subpoenaed the Trump Organization last year as it revived its investigation into the company’s involvement into hush-money payments to two women who alleged they had affairs with Trump, according to the New York Times. The Trump Organization has denied any wrongdoing.Copyright © 2020, ABC Audio. All rights reserved.