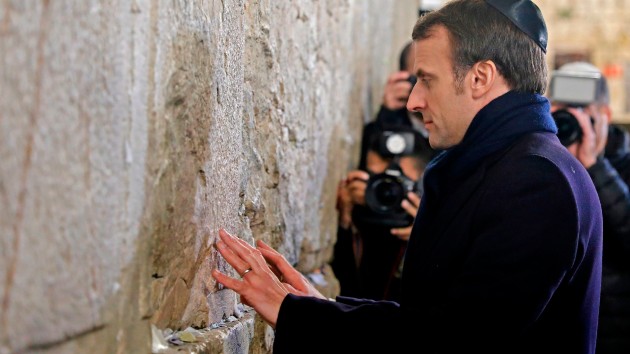 AHMAD GHARABLI/AFP via Getty Images(PARIS) — French President Emmanuel Macron got into a testy exchange with Israeli security guards at the Church of Saint Anne in Jerusalem on Wednesday, accusing the guards of violating rules preventing them from entering what is considered French territory. The Ottoman Empire gifted the church, built by French crusaders in the 12th century, to France in 1856. “I don’t like what you did in front of me,” Macron shouted at police outside the church.The special status dates back to France’s involvement in the Crimean War, which opposed the Ottoman Empire and the Russian Empire. At the end of the war, Abdülmecid I offered the Church of Saint Anne to Napoleon III to thank him for France’s engagement alongside the Ottomans. “You do a good job in the city and I appreciate it, but please respect the rules established for centuries,” the president said. “They will not change with me, I can tell you.”Late French President Jacques Chirac had a similar confrontation at the church during his visit in 1996, refusing to see armed men enter French territory and declining to enter Saint Anne until Israeli police left. The trip is Macron’s first to Israel and the Palestinian territories as president of the French Republic, and is set to culminate in the commemoration of the 75th anniversary of the liberation of the Auschwitz-Birkenau concentration camp on Thursday at the memorial of Yad Vashem.Macron has planned several symbolic visits to reassure the Jewish community, while France experiences a resurgence of anti-Semitic acts. Police said anti-Semitic attacks rose by 74% in France in 2018, according to a Office of the United Nations High Commissioner for Human Rights report. Just over one-third of French people of Jewish faith or culture say they feel threatened every day because of their religious affiliation, according to an IfopOpinion study for FondaPol and AJC Paris. According to Ifop, 60% of Israelis are worried for the security of French Jews.