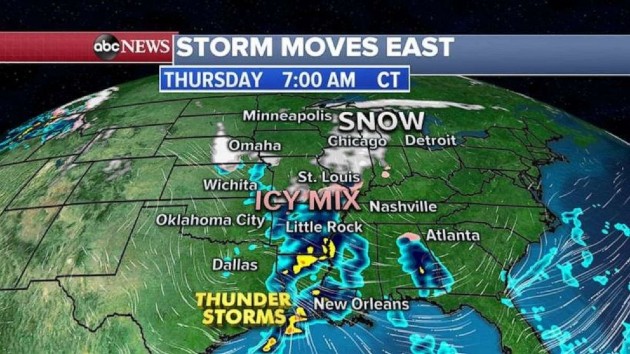 ABC News(NEW YORK) — A storm system is developing in the Central U.S. with icy and snowy conditions to the north and heavy rain and even thunderstorms in the South. On Wednesday, up to 6 inches of snow fell in Northern Missouri and up to 4 inches fell in Southern Minnesota. Freezing rain and sleet fell from Nebraska down to Arkansas and into Illinois. Many spinouts and accidents were reported Wednesday due to the ice and snow that fell on the roads and highways in the heartland.On Thursday morning, the storm system stretches from Michigan to the Gulf Coast with winter weather alerts for seven states from Minnesota to Arkansas. Wet snow is flying Thursday morning around Chicago with an icy mix in St. Louis, Missouri.By Friday, the storm system will lift north, bringing a heavier band of snow from north of St. Louis to just north of Chicago. To the east and south, heavy rain will be falling from Ohio to the Carolinas, with a few thunderstorms also possible in the Carolinas.Part of the same storm will redevelop on the East Coast by Saturday, bringing heavy rain to the I-95 corridor from Washington, D.C., to New York City and Boston. The total snowfall for the entire storm duration will be near a half a foot in northern Great Lakes, with 3 to 6 inches of snow from Missouri to near Chicago and into Wisconsin.For the Northeast, snow will be limited to the higher elevations of Pennsylvania and New York, into Vermont, New Hampshire and Maine, where 3 to 6 inches of snow is possible. Copyright © 2020, ABC Audio. All rights reserved.

Large Chinese reconnaissance balloon spotted over the US, officials say