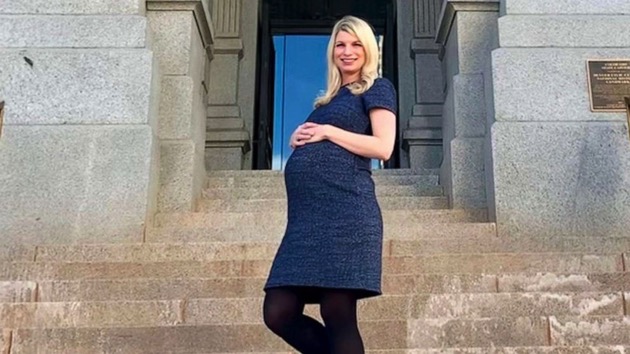 Office of Sen. Brittany Pettersen(DENVER) — Colorado State Sen. Brittany Pettersen had no idea she was making history.Pettersen, 38, who this week gave birth to a son named Davis, is the first state lawmaker in Colorado history to have a baby during a legislative session.”It was really surprising,” Pettersen told Good Morning America, noting Colorado has had women in its legislature since 1895. “I did not know I was going to be the first woman to give birth during session, but I know I’m not going to be the last one.””It’s reflective of our changing times,” she said. “We have more women running and more women winning.”Pettersen, who also served six years in the state House of Representatives, was just as surprised to discover that the Colorado General Assembly has no maternity leave policy in its statute and few to no accommodations for new mothers, including the ability to vote remotely or bring children on the Senate floor.”Nobody knew that [a maternity leave policy] didn’t exist,” said Pettersen, who gave birth Jan. 19, less than two weeks into the 2020 legislative session. “The fact that nothing existed is reflective that [lawmaking] was very much a profession that a large majority of men went into.””That’s changing, and that’s a good thing,” Pettersen added. “When women are in leadership positions in general they are going to advocate for things that support women and families that are going to be overlooked otherwise.”Pettersen, a Democrat, was elected in 2018 along with four other women who helped give Democrats a Senate majority.Pettersen said her Democratic colleagues in leadership have told her to take the time off she needs and are working with her to update statutes so a maternity leave policy is in place for all lawmakers.”I have flexibility because I have leadership that’s working with me and we’re going to update and modernize our statutes, but that shouldn’t be determined by who’s in the majority,” Pettersen said. “It should be a blanket policy and shouldn’t be politicized and we need to make sure that happens.”The United States is the only country among 41 industrialized nations that does not mandate paid maternity leave, according to 2016 data from the Organization for Economic Cooperation and Development.The U.S. Bureau of Labor Statistics found that just 15% of all private workers had access to paid family leave as of 2017.Pettersen plans to take just one month leave from work and said her priority when she returns to the Senate will be to push for the passage of a paid family leave bill.”Going through this, I know firsthand how difficult it is — and I’m only in the beginning of it — and how essential this time off is and how lucky I am that my husband has paternity leave and I have a workplace that’s supporting me and making sure I’m able to take this time,” she said. “Other people don’t have this time and I really don’t know how they do it.”The topic of paid family leave is hotly contested in Colorado, a reflection of the national debate. The state is weighing whether to implement a statewide paid family leave program or let businesses in the private sector play more of a role.Pettersen said she has learned through her own experience that women need choices and options to do what works for them after the major physical and emotional event of childbirth.”When I told friends I thought I’d go back [to work] in two weeks they told me they couldn’t walk for two weeks [after giving birth],” she said. “Everyone is different which is why you need the flexibility to choose what works for you.”Copyright © 2020, ABC Audio. All rights reserved.