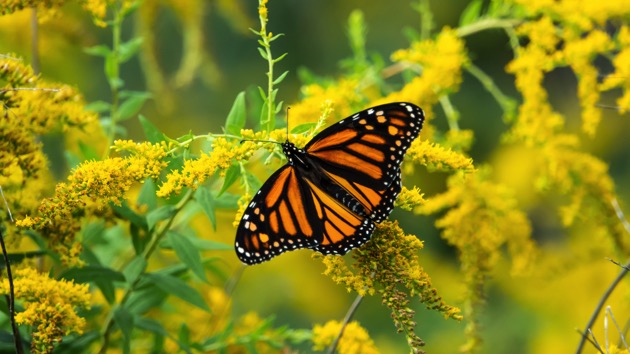 ErikAgar/iStock(PORTLAND, Ore.) — The number of monarch butterflies wintering in California remains at a critically low level, according to a new study.The total number of monarchs observed this year during The Xerces Society Thanksgiving count was 29,418, according a press release issued Thursday by the nonprofit, which focuses on conserving invertebrates.While that number is slightly higher than the 2018-2019 count — which saw an all-time low of 27,218 — the organization warned that this year’s numbers “are no better.”This year’s results came amid a greater survey effort and more volunteers visiting more sites, according to the nonprofit.”We had hoped that the western monarch population would have rebounded at least modestly, but unfortunately it has not,” Emma Pelton, the Xerces Society’s western monarch lead, said in a statement.In 1997 there were more than 1.2 million monarch butterflies wintering along the California coast.Pelton said the silver lining was that the population didn’t shrink any further.”We can take heart that it’s not too late to act,” she said.For decades, monarch butterflies in the West have been in decline because of loss of habitat, including destruction of their California wintering sites and loss of milkweed for caterpillars and flowering resources to fuel migration.At least 21 wintering sites in California have been “significantly damaged or destroyed” by the construction of housing developments and cutting down of trees, according to The Xerces Society.Monarch butterflies return to the same sites, often the same trees, every fall for wintering.Climate change has also been a factor in changing the biodiversity in California. Lowering carbon footprints and adopting nature-based climate solutions for pollinators and other wildlife are needed, environmentalists say.The Xerxes Society urged lawmakers on both a state and federal level to address the issue.”We must protect all remaining overwintering sites in order to save our monarchs,” Sarina Jepsen, director of the Xerces Society’s Endangered Species and Aquatics Program, said.Copyright © 2020, ABC Audio. All rights reserved.