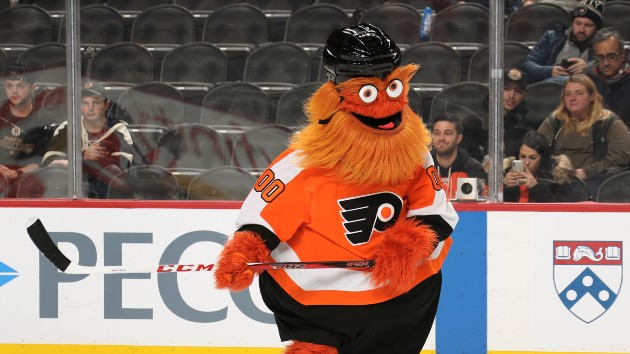 Len Redkoles/NHLI via Getty Images(PHILADELPHIA) — Gritty, the highly popular mascot of the Philadelphia Flyers, is known for his antics both on and off the ice — but one family alleges that he may have gone too far after accusing the mascot of punching a 13-year-old boy. Philadelphia Police say that they are investigating the alleged physical assault, which the family says happened in November 2019 at the Wells Fargo Center.

Chris Greenwell took his 13-year-old son to meet the mascot but when the teen had his picture taken with Gritty, the boy allegedly tapped the mascot’s head, which led Gritty to lunge out of his chair and punch the boy in the back, according to allegations reported by Philadelphia ABC station WPVI-TV. Greenwell said that his son was hit so hard that he suffered a back bruise requiring medical attention, according to documents obtained by the Philadelphia Inquirer.The Philadelphia Flyers, however, say that an internal investigation found no evidence to suggest the event ever happened. Gritty debuted as the Flyers’ mascot in September 2018 and the large, furry orange creature was an instant hit. He was voted as the number one mascot in the National Hockey League just six months later in March 2019. Gritty has a Twitter account with almost 300,000 followers, as well as website that describes him as having “bully” tendencies as well as being “loyal but mischievous” and “talented but feisty.” Copyright © 2020, ABC Audio. All rights reserved.