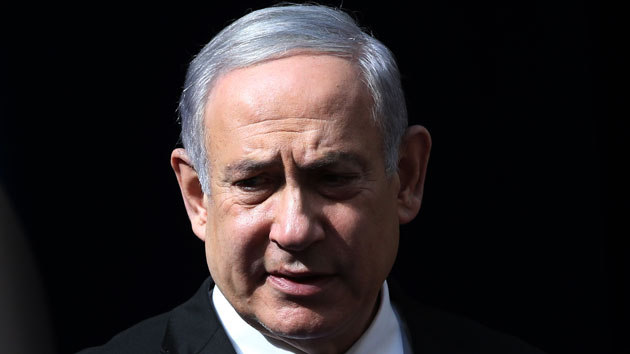 Mikhail Svetlov/Getty Images(WASHINGTON) — Israeli Prime Minister Benjamin Netanyahu and his top political challenger Benny Gantz will visit Washington next week to discuss peace in the Middle East, the White House announced Thursday.Vice President Mike Pence said he extended the invitation to Netanyahu and Gantz — the leader of Israel’s Blue and White party — during his trip to Jerusalem, on behalf of President Donald Trump.The timing of the visit could provide a distraction from the ongoing impeachment trial in the Senate.The Trump administration has repeatedly delayed the release of a plan it’s devised for peace between Israel and its neighbors, as political turmoil in Israel brought criminal charges against Netanyahu and two parliamentary elections in under seven months.Notably absent from the administration’s announcements was any mention of the Palestinians.The White House declined to comment on whether it had also extended an invite to Palestinian officials, who cut off relations with the Trump administration in 2017 after the U.S. recognized Jerusalem as Israel’s capital. They have also openly criticized Trump’s actions as heavily biased in favor of Israel.Bringing Netanyahu to the White House just over a month before the latest round of Israeli elections, scheduled for March 2, fits a pattern in which Trump has aimed to provide a domestic boost for his ally. The visit would allow the two leaders to put their close relationship before cameras.While Gantz was also invited, Pence made clear the former military leader was an afterthought invited only after Netanyahu suggested he come, too.Last year, just weeks before the elections in April, Trump announced in a tweet that the U.S. would recognize Israel’s sovereignty over the disputed Golan Heights, an area that overlooks the Jordan Valley; the move widely viewed as an attempt to help Netanyahu.Days before another vote in September, Trump teased a conversation with Netanyahu about a possible mutual defense treaty.Both leaders accepted the invitation to come to Washington, according to White House officials, and Netanyahu said he would “gladly” come. Pence told reporters in Jerusalem that the meeting would include a discussion of “regional issues, as well as the prospect of peace here in the Holy Land.”Amid hundreds of tweets about his impeachment trial, Trump wrote on Twitter Thursday that the U.S. looked forward to hosting Gantz and Netanyahu.”Reports about details and timing of our closely-held peace plan are purely speculative,” he added.Netanyahu, who has adopted Trump’s language and messaging tactics in a bid to align himself with the American president — widely popular in Israel — was charged in November with fraud, bribery and breach of trust.He is currently seeking immunity from prosecution even as he campaigns to hold his office.Copyright © 2020, ABC Audio. All rights reserved.