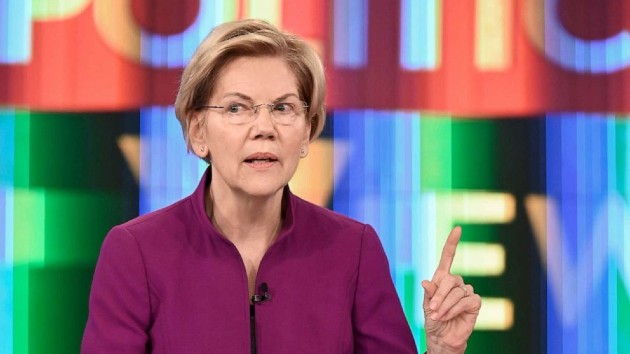 Jeff Neira/Walt Disney Television(WASHINGTON) — In a lengthy Twitter thread, Massachusetts Sen. Elizabeth Warren slammed Mike Bloomberg for his eponymous news organization’s decision not to investigate Bloomberg — or any other Democrats — during his 2020 campaign. Warren called on the billionaire former New York City mayor to divest from the company and accused him of hobbling the press. Warren pointed to ABC News’ reporting from Tuesday, outlining a new Federal Election Commission complaint that Bloomberg’s 2001 mayoral opponent, Mark Green, plans to file against his former rival. In it, Green alleges that Bloomberg News is proffering biased coverage of the 2020 primary — putting out negative stories on opponents while avoiding scrutiny of Bloomberg himself, a “coordinated contribution by a corporation to a candidate.” Taking to Twitter Wednesday evening, Warren laid into Bloomberg, who was mayor of New York City from 2002 to 2013. “Bloomberg News banned its reporters from investigating Democratic candidates as Mike Bloomberg runs for president. This ban puts reporters in an impossible situation and undermines a free press. Bloomberg should lift the ban and divest from Bloomberg News,” Warren said in her first tweet, going on to highlight her own accessibility to media members.”I’ve taken more than a thousand unfiltered questions from the press and from voters since I got in the race,” Warren continued. “I welcome tough questions and scrutiny because the free press is a cornerstone of our democracy — and every presidential candidate should be closely vetted.” “If Michael Bloomberg wants to be the Democratic nominee, he should let reporters do their jobs and report on him, and everyone else, as they see fit,” Warren said in a third tweet.With Bloomberg’s unorthodox run for the White House comes a unique situation: Most candidates don’t own media companies. Thus what might be considered as “coordinated contribution” takes on fresh nuance. Bloomberg News’ policy toward reporting on the 2020 contenders is not a full-stop ban on primary coverage, but it does explicitly slope away from investigations of Bloomberg.In a memo sent to newsroom staff the same day Bloomberg announced his 11th-hour bid for the Democratic nomination, John Micklethwait, Bloomberg News’ editor-in-chief, detailed that that the outlet would maintain its “tradition” of not investigating Bloomberg, his family or foundation, and that in the interest of fairness it would “extend the same policy to his rivals in the Democratic primaries.” It’s that same memo Green points to in his FEC complaint, claiming such reporting guardrails constitute “illegal corporate in-kind contributions” to Bloomberg’s campaign. Green told ABC News on Monday he supports Warren’s candidacy, adding that he hasn’t spoken with her campaign and isn’t working in coordination. Asked to confirm this, the Warren campaign declined to comment.When reached by ABC News, a Bloomberg News spokesperson declined to comment. Bloomberg’s campaign also declined to comment Wednesday evening. In the staff memo, Micklethwait sought to make clear how the news organization would handle coverage. “We cannot treat Mike’s Democratic competitors differently from him. If other credible journalistic institutions publish investigative work on Mike or the other Democratic candidates, we will either publish those articles in full or summarize them for our readers — and we will not hide them,” the memo read. “For the moment, our P&I team will continue to investigate the Trump administration as the government of the day. If Mike is chosen as the Democratic presidential candidate (and Donald Trump emerges as the Republican one), we will reassess how we do that.” Copyright © 2020, ABC Audio. All rights reserved.