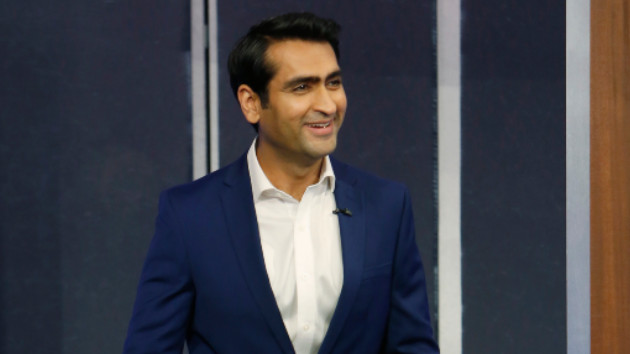 ABC/Randy Holmes(LOS ANGELES) — Around the holidays, if you recall, actor Kumail Nanjiani found himself an unlikely viral star, when he posted a snap of his ripped body, which he whipped into shape for Marvel’s The Eternals.

He talked about the situation with Jimmy Kimmel Thursday night, explaining he loved the attention — particularly from Dwayne “The Rock” Johnson, who gave him a thumbs-up online.

The visit to Kimmel was just two days after Nanjiani’s final day on the set, adding that his strict diet continued.

“I have not had pizza or a donut in over a year!” he declared. “I have had no refined sugar in a year. I’ve had almost no carbs at all.”

For his part, Kimmel, who’s a foodie, surprised the actor with a mobile full of desserts, which descended from the ceiling to come to rest around Nanjiani’s head.  Kimmel also offered Nanjiani a pizza, courtesy of Jimmy’s sidekick, Guillermo.

After breaking for a commercial, the actor was still working over various desserts while trying to promote his Apple TV Plus show, Little America. “What were we talking about again?” he asked, mouth full.Marvel’s The Eternals is set for release on November 6 from Disney, the parent company of ABC News.