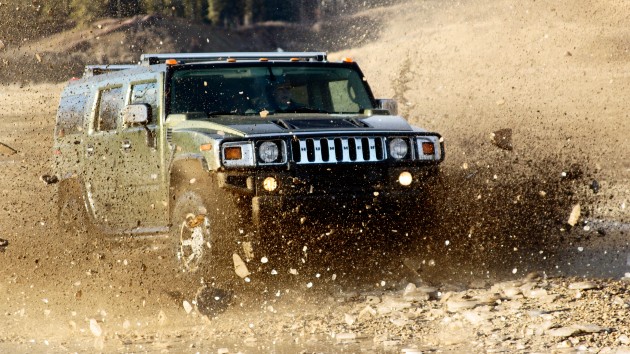 Spauln/iStock(NEW YORK) — General Motors’ hulking, ostentatious, gas-guzzling Hummer SUV was once the scourge of environmentalists. Now the military-style ute may have its ultimate revenge: a second chance as an all-electric pickup truck. That’s right. GM, which discontinued the Hummer brand in 2010 as gasoline prices were skyrocketing and the Detroit automaker was culling brands as part of its bankruptcy agreement, has decided to revive the Hummer name, according to a report in The Wall Street Journal. The nameplate will allegedly be sold under GM’s GMC brand, the company’s premium truck division. The new Hummer will be officially announced in a Super Bowl ad that also stars LeBron James of the Los Angeles Lakers, the WSJ said, citing unnamed sources. GM declined to comment to ABC News. A representative for James did not respond to ABC News’ request for comment. Karl Brauer, executive publisher of Kelly Blue Book and AutoTrader, called the reported move “fabulous,” noting the “beautiful irony” in the vehicle’s return. “Ten years ago the Hummer was public enemy No. 1,” Brauer told ABC News. “It was a poster child for environmentalists — a symbol of the end of the earth.” Even though the brawny Hummer was a target of the green community — dealers would report vandalism of the vehicles — the 10-mpg SUV appealed to a certain segment of drivers, and deliveries of the Hummer H2 and H3 totaled 71,524 units in 2006, its best year of sales since 1999, when GM bought the brand from AM General. Brauer noted that today, 70% of all new vehicles sold in the U.S. are trucks and SUVs. “Trucks will always be critical to domestic manufacturers,” he said. “This is a segment that’s growing, and the Hummer name is high profile.” Plus, it adds visibility to GM’s electrification efforts, he said. GM has vowed to produce 20 all-electric vehicles by 2023, with Cadillac as the lead GM brand for future EVs. GM currently has one EV available to eco-conscious consumers: the Bolt, a “nerdy-looking hatchback with a great range,” according to Ed Kim, vice president of industry analysis at AutoPacific. Sales of the Bolt have been modest compared to the Tesla Model 3, the top-selling EV in the U.S.If GM truly wants to take on EV leader Tesla — and its futuristic, nontraditional Cybertruck — an all-electric Hummer makes perfect sense, Kim noted. But the Hummer name could also turn off potential buyers.”The Hummer was a lightning rod for controversy … it was very polarizing,” he said. “It was big and brash and people drove it to make a statement.” GM could minimize the risk by casting the born-again Hummer as an upscale, outdoor adventure vehicle that’s no longer powered by Middle Eastern oil, Kim suggested. “Vehicles that are rugged and cool and go off-roading are very fashionable right now,” he explained. “GM still owned the Hummer trademark. Why not leverage the name?”GM is not the only automaker with plans to build an EV truck. A slew of battery-electric models are about to join the marketplace in the next 12 to 20 months, including offerings from Ford, Jeep, Rivian and Bollinger.The all-electric Hummer “is a move to expand the reach into important segments and bring in new buyers to EVs,” Jeff Schuster, president of global vehicle forecasting at LMC Automotive, told ABC News. “GM wanted to do something that would stand out in a crowded market.” Kim of AutoPacific said current pickup owners will still need to be wooed by carmakers. He’s most bullish on the Rivian R1T truck, which is expected to cost about $70,000 and be a high-volume seller. “There’s a lot of buzz around Rivian,” he said. “There’s so much innovation in that truck.”Eddie Alterman, chief brand officer at Hearst Autos, said a Hummer truck could put to bed consumers’ lingering concerns about the all-weather, all-terrain capabilities of EVs. And bringing back the Hummer nameplate has financial upsides for GM. “Establishing brand names in the public sphere is a very expensive affair,” he told ABC News. “GM has a successful history of repurposing brand names. The Hummer is still an American icon. People rap about them.”Copyright © 2020, ABC Audio. All rights reserved.