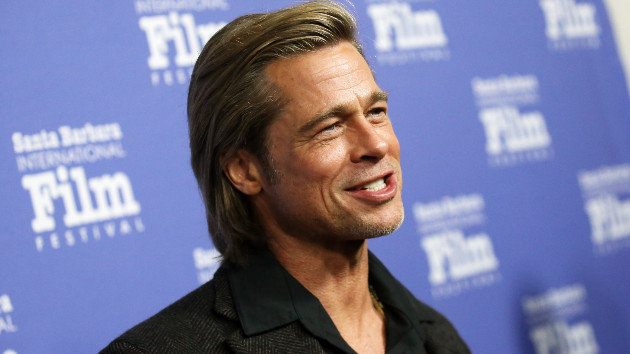 Photo by Michael Tran/Getty Images(LOS ANGELES) — As we learned recently, Brad Pitt is on Tinder, but he already might have locked in a date for the Oscars: Dax Shepard.

Once Upon a Time…In Hollywood nominee Pitt received the Maltin Modern Masters Award at the Santa Barbara International Film Festival Wednesday night, when he joked to E! that Shepard could walk the red carpet with him.

Truth be told, Dax started this back-and-forth, when he revealed on The Ellen DeGeneres Show that he had a crush on Pitt. Pitt returned the compliment at one point last year, and Shepard flipped.

Dax and Brad told Ellen that they recently went riding their motorcycles together, during a day that also included a helicopter ride. “I went on a date with him,” Dax joked.

To this, Pitt laughed to E!, “He’s a funny fella.” When asked if he’d consider Dax as his Oscars date, Pitt responded, “Yeah, yeah that’s a great idea.”

Pitt was still in a joking mood when he accepted his award, from his Se7en and Fight Club director David Fincher. Now 56, Pitt said, “I can’t do night shoots anymore,” and added at his age, “I no longer remember the first rule of Fight Club.”

For the record, it’s the same as the second rule: You do not talk about Fight Club.