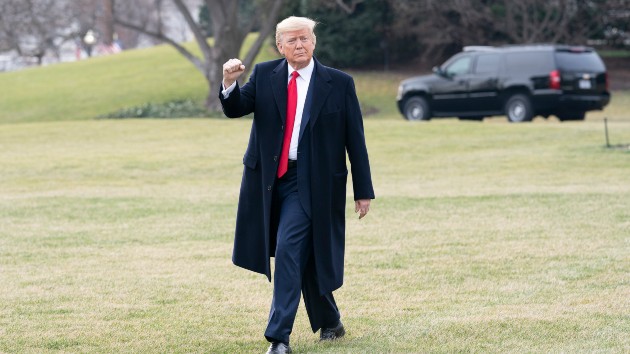 Official White House Photo by Joyce N. Boghosian(WASHINGTON) — As Democrats lay out their impeachment case against President Donald Trump, his reelection campaign plans its biggest television ad blitz yet next week, gearing up for the second week of the Senate impeachment trial. The Trump campaign is scheduled to blanket $10 million worth of national television airtime starting Tuesday, marking the single biggest TV ad spending in a week by the campaign this cycle, according to media analysis group CMAG/Kantar. The reelection team has already launched a new anti-impeachment ad, blasting House Speaker Nancy Pelosi “and the far left” for “trying to overturn his election with a sham impeachment.”The ad, captured by CMAG/Kantar on Thursday in Washington, D.C., urges viewers to show support for the president by texting the campaign, the latest major play by the campaign to boost their already massive internal supporter list via text message, which the team then turns around and uses for fundraising. Early last year, the campaign started plastering the same text code featured in the new TV ad over everything from videos and memes to campaign staffers’ Twitter handles. According to CMAG’s data, the Trump campaign’s second biggest ad buy was during the first week of October, when the campaign spent about $3.8 million on television ads and $1.8 million on digital ads.The Trump campaign has also bashed Democrats over impeachment in fundraising emails and texts to supporters and through new Facebook ads asking for donations in the first week of the Senate impeachment trial, calling the impeachment a “witch hunt” and “war on democracy.” In another email blast sent out to the campaign’s list of millions of supporters on Thursday, Trump’s reelection team slammed lead impeachment manager Rep. Adam Schiff as a liar, claiming he was “caught in yet ANOTHER LIE.” However, the email did not detail what Schiff said that the campaign was calling into question.Hours before the Senate impeachment trial officially began, Trump’s campaign launched a string of new anti-impeachment Facebook ads on Tuesday, with some falsely claiming House Democrats’ efforts to impeach the president have “failed.” The team set a goal of raising $2 million in the first 24 hours of the trial, but have yet to disclose any new fundraising numbers or if they’ve reached that goal. They previously said they raised $15 million in 72 hours after Pelosi first announced the impeachment inquiry last September. In all, the Trump campaign has spent a total of $52 million on ads so far this cycle, with nearly $35 million on digital ads on Facebook and Google and a little more than $17 million on broadcast and cable television ads.Copyright © 2020, ABC Audio. All rights reserved.