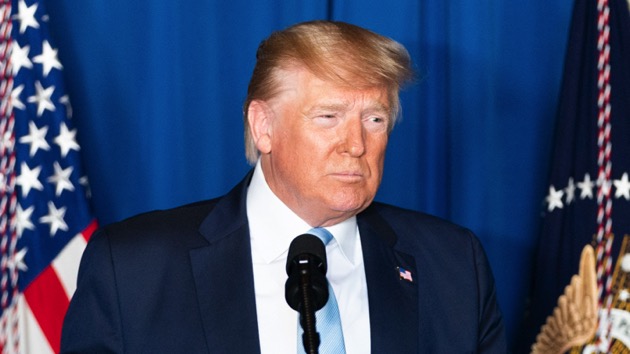 Official White House Photo by Shealah Craighead(WASHINGTON) — President Donald Trump on Friday amplified attacks on a key impeachment witness and Purple Heart veteran, after Democrats played clips of his testimony during the Senate trial the night before.Trump shared a Fox News clip of Republican Sen. Marsha Blackburn of Tennessee sharply criticizing U.S. Army Lt. Col. Alexander Vindman, the first White House official to cooperate with the House impeachment investigation.”He has a problem with judgment, that has been pointed out,” Blackburn said on the conservative cable channel. “He has had problems with going outside his chain of command, which is exactly what he did here.”After Democrats on Thursday used video of Vindman’s House testimony, Blackburn took to Twitter to question the military officer’s patriotism. She also called his decision to raise concerns about President Trump “vindictive.”“Adam Schiff is hailing Alexander Vindman as an American patriot,” Blackburn tweeted. “How patriotic is it to badmouth and ridicule our great nation in front of Russia, America’s greatest enemy?”Lt. Col. Vindman, a Ukraine expert on the National Security Council, testified before the House about his concerns over a July 25 phone call between President Trump and the Ukrainian president. Democrats have pointed to Vindman’s account as part of the evidence that Trump pressured the Ukrainians to investigate former Vice President Joe Biden.Blackburn made multiple unsubstantiated claims on twitter Thursday that Vindman had worked with an anonymous whistle-blower to leak the phone call and “wanted to take out Trump.”Democratic Minority Leader Sen. Chuck Schumer defended Vindman at a press conference Friday morning, referencing the Army officer’s testimony when he evoked a conversation about his father over the consequences of speaking out.“When Vindman stepped forward, a Purple Heart veteran and said his dad called him and said ‘aren’t you worried this will hurt you?’” Schumer recalled. “He said this is America. We believe in the truth. The truth matters. Right matters.”Vindman used the phrase “right matters” in his testimony in explaining why he felt compelled to speak out against President Trump. House impeachment manager Rep. Adam Schiff repeatedly echoed Vindman’s words in his closing arguments on the Senate floor Thursday.”If right doesn’t matter, it doesn’t matter how good the constitution is,” Schiff said. “It doesn’t matter how brilliant the framers were. It doesn’t matter how good or bad our advocacy in this trial is. If right doesn’t matter, we’re lost. If the truth doesn’t matter, we’re lost.”While Vindman continues to serve at the White House, he has largely stayed out of the public eye since his testimony. His lawyer admonished the senator in a statement to ABC News on Thursday.“That a member of the Senate – at a moment when the Senate is undertaking its most solemn responsibility – would choose to take to Twitter to spread slander about a member of the military is a testament to cowardice,” said David Pressman, Vindman’s legal counsel. “While Senator Blackburn fires off defamatory tweets, Lieutenant Colonel Vindman will continue to do what he has always done: serve our country dutifully and with honor.” Copyright © 2020, ABC Audio. All rights reserved.