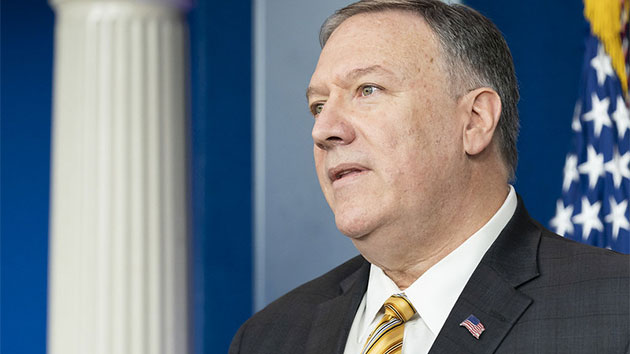 Official White House Photo by Andrea Hanks(WASHINGTON) —  Secretary of State Mike Pompeo attacked a National Public Radio reporter in a blistering statement Saturday after the network said the top U.S. diplomat admonished her using expletives, called her a liar and demanded she find Ukraine on a map.The incident has drawn sharp criticism of Pompeo, but he accused NPR’s Mary Louise Kelly of lying, even while not disputing her account of his tirade.Kelly interviewed Pompeo Friday morning at the State Department in Washington, pressing him on the Trump administration’s Iran policy before turning to Ukraine and former ambassador Marie Yovanovitch. The career diplomat who still works under Pompeo was reportedly surveilled and possibly threatened by associates of President Donald Trump’s lawyer Rudy Giuliani, but Pompeo has never issued a public statement of support for her.That line of questioning angered Pompeo, according to Kelly, who stared her down after the interview was ended by a staffer and then called her back to his offices.There, he berated her using the f-word, asked whether Americans cared about Ukraine and demanded that she find the eastern European country on a map, she reported Friday on NPR’s “All Things Considered”.After pointing it out, she said Pompeo abruptly dismissed, and she thanked him for his time.The encounter was not off the record, according to Kelly, who said she wouldn’t have agreed to it being so if anyone asked her. Pompeo disputed that fact, claiming Kelly “lied to me, twice.””First, last month, in setting up our interview and, then again yesterday, in agreeing to have our post-interview conversation off the record,” he said Saturday in a statement.He went further, saying it was “another example of how unhinged the media has become in its quest to hurt President Trump and this Administration.””It is no wonder that the American people distrust many in the media when they so consistently demonstrate their agenda and their absence of integrity,” he said.His statement didn’t dispute any of the contents of their tense, post-interview exchange, including his use of expletives or him asking about American interest in Ukraine. But he insinuated that Kelly, who was born in Germany and has a masters in European Studies from Cambridge University in the U.K., misidentified Ukraine on an unmarked map as Bangladesh.”It is worth noting that Bangladesh is NOT Ukraine,” he concluded his statement.NPR’s senior vice president for news Nancy Barnes stood by Kelly in a statement to ABC News.”Mary Louise Kelly has always conducted herself with the utmost integrity, and we stand behind this report,” Barnes said.A group of Senate Democrats blasted the secretary on Saturday for his response to Kelly, expressing their “profound disappointment,” in a letter addressed to Pompeo.”At a time when journalists around the world are being jailed for their reporting — and as in the case of Jamal Khashoggi, killed — your insulting and contemptuous comments are beneath the office of the Secretary of State,” the senators wrote in the letter. “Instead of calling journalists ‘liars’ and insulting their intelligence when they ask you hard questions you would rather not answer, your oath of office places on you a duty and obligation to engage respectfully and transparently.”Pompeo has a history of berating reporters whose questions he dislikes.In October, he accused Nancy Amons, a correspondent with Nashville’s WSMV television station, that she has her “facts wrong” and “sounds like you’re working, at least in part, for the Democratic National Committee” when she asked whether Trump’s hold on security assistance to Ukraine was contingent on Ukraine’s president announcing an investigation into former Vice President Joe Biden.He also used that attack — of working for the DNC — against PBS Newshour anchor Judy Woodruff in October, when she asked similar questions about whether it was appropriate for Trump to pressure Ukraine to investigate Biden. Copyright © 2020, ABC Audio. All rights reserved.