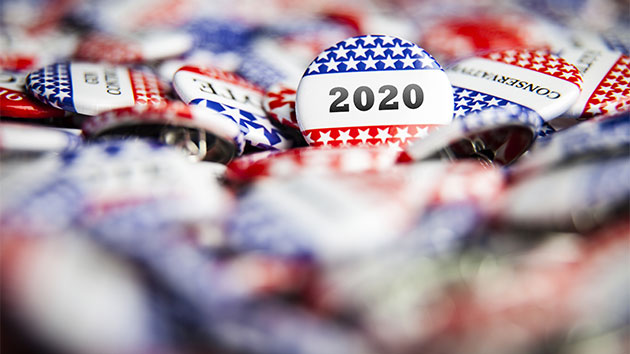 adamkaz/iStock(WASHINGTON) —  Following the first week of splitting her time between the Senate impeachment trial of President Donald Trump and her Democratic presidential campaign, Sen. Amy Klobuchar, D-Minn., said that her strategy is to continue with “creative approaches,” such as short bursts of travel to the early primary states and “tele-town halls” from Washington.”The comeback strategy is coming back here whenever I can,” Klobuchar said on ABC’s “This Week” Sunday. “The minute we got done with the hearing yesterday, I got to Iowa, did three events. I have three events today.”While she’s stuck in Washington for late nights during the impeachment trial, she said she’ll continue holding “tele-town halls,” claiming that strategy has already paid back in dividends with the campaign reporting that up to 12,000 Iowans dialed into that statewide call Wednesday night.Klobuchar said voters have to understand her “constitutional duty” mandates her sitting in judgment of the president outside the Democratic presidential race.”No one has ever run in a major race like this, when you are asked to be back in the Senate the whole time, but I figured the voters of Iowa, New Hampshire, Nevada and South Carolina, are going to understand that I have a constitutional duty to fulfill,” Klobuchar told ABC News Chief Anchor George Stephanopoulos. “I have this real job, and then I’m in the arena and then I’m actually taking on the Trump administration, and all of their shenanigans and behavior,” Klobuchar said. “I think it’s actually a good thing, as when I sit in that chamber and I look over at my colleagues, I think about what I say on the campaign trail, this is decency check.”On the impeachment trial, Klobuchar was asked if she thinks the Senate should try to censure the president if the Republican-led Senate votes to acquit Trump, but Klobuchar said they haven’t gotten there yet. Instead, she said she is more concerned with making sure they hear from witnesses.”What I want my colleagues to do is to join us in getting the witnesses,” the former prosecutor said. “You can’t have a trial without the witnesses, however they vote, whatever they choose to do when the evidence comes in, they cannot go down in history as the people that block the truth from coming forward because eventually it will come forward.”Looking to Iowa and New Hampshire, Bernie Sanders, I-Vt., said he is positioned to beat Trump in November because of his campaign’s ability to organize, raise grassroots money and speak to the American working class, but Klobuchar said on “This Week,” that recent elections could prove him otherwise.”I think when you look at what just happened in the last election, as well as those governors races in Kentucky, Louisiana — look what happened — those were candidates where Democrats won in states that were red states that were purple like Michigan, like Kansas, congressional races all over the country,” Klobuchar said.She said that all those races benefitted from not proposing to blow “up our current health system and kicking 149 million Americans off their current health insurance in four years.””Sanders and I have a big disagreement on that issue,” Klobuchar told Stephanopoulos.Klobuchar said that she, “brings the receipts to this race” having won races in “very red, and very purple suburban districts and doing that by bringing along with her a fired up Democratic base, as well as independent to moderate Republicans.”On her path forward in the presidential race, Klobuchar said she understands the challenges on running with lower name recognition and less money.”I know I don’t have the highest name ID compared to all these other people I’m running against, or the billions of dollars that two of my opponents have, what we’ve got is grit,” Klobuchar said. “I’m still standing and it’s because of what I bring with me.” She added that the upcoming New Hampshire debate, hosted by ABC News, WMUR-TV and Apple News, will also help her chances, especially since she is one of two candidates representing an important region.”There will be in another debate in New Hampshire I’ll be on that stage and I’m only one of two candidates left from the middle of the country, the very, very part of the country that we need to win,” she said. Copyright © 2020, ABC Audio. All rights reserved.