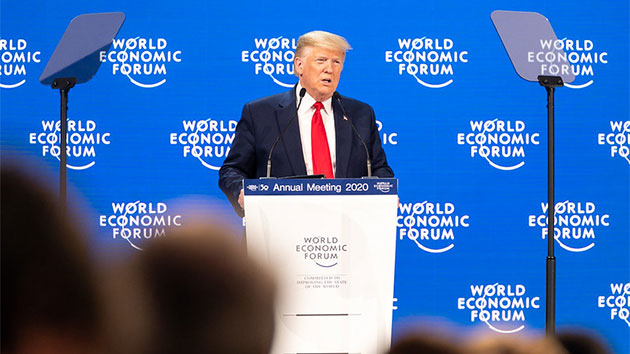 Official White House Photo by Shealah Craighead)(WASHINGTON) —  Sen. James Lankford, R-Okla., dodged when ABC News Chief Anchor George Stephanopoulos asked if the senator agreed with the argument from the president’s lawyers that the president did nothing wrong.”You heard Pat Cipollone at the opening yesterday of his argument say the president did absolutely nothing wrong,” Stephanopoulos said, referring to the White House counsel’s remarks on the Senate floor Saturday. “Do you agree with that? Do you think it’s appropriate for presidents to solicit foreign interference in an election?” Instead, the Oklahoma Republican disputed whether President Donald Trump had actually sought foreign interference.Stephanopoulos pressed for an answer, even asking Lankford if he would feel the same had it been President Barack Obama making the request instead of Trump. Lankford eventually said that it would be different if the president had initially raised the issue with Ukrainian President Volodymyr Zelenskiy. Instead, he said, Trump was responding to the issue when it was raised in the phone call.”If he’s starting that phone call and saying here’s what I’m calling you about and I want you to be able to do that, it’s very different from President Zelenskiy raising it to him and (Trump) saying ‘yeah I’m glad you’re meeting with Rudy Giuliani, go ahead and meet with him and get a chance to be able to visit with him,"” Lankford said. “That’s not inappropriate, but it is a big deal to mix official and unofficial.””The president is literally — when it’s being raised in an official setting — saying go talk to Rudy Giuliani, I’m glad you’re visiting with him but that’s a separate issue,” Lankford added.Stephanopoulos also asked if the Oklahoma Republican thought it was acceptable for the president to ask a foreign nation to investigate the Bidens instead of going to the Justice Department.Lankford conceded that the DOJ would be the proper channel for such an investigation, but compared the work by the president’s personal attorney Rudy Giuliani in Ukraine to gathering opposition research.Over three days last week, Democrats presented their case that the president had abused his power by withholding military aide from Ukraine and obstructed the congressional inquiry into the matter.After House managers finished their opening arguments on Friday night, Trump’s legal team began to make their case in the impeachment trial on Saturday morning. The president’s lawyers claimed that Trump was justified in seeking to investigate the Bidens and attacked the process of the House impeachment inquiry in their opening arguments. In a separate interview on “This Week,” House manager Val Demings, D-Fla., said the president’s lawyers could “distort and try to deflect,” but that the facts in the impeachment trial are clear.”While they are asking us — I believe — and the American people to not believe our lying eyes and our lying ears, I do believe that the information — the testimony — when you put it all together is as clear as two plus two equals four,” she added.On the issue of whether or not the Senate should call witnesses in the impeachment trial, Lankford said, “the House did not do their homework,” when it prepared its case for impeachment.”They wanted to move as fast as possible and now they want to slow down the trial as much as possible in the Senate,” he said. “It’s a very odd political strategy from them, rather than a fact-finding strategy.”Demings said she expects the Senate to live up to the oath they took at the beginning of the trial.”I’m just not going to give up on the Senate and I’m not going to draw any conclusions,” she said.

“If they are interested in understanding the complete truth, then they would be willing — like every other trial and in every other courtroom across this country, because they are judges by the way — that they would want to hear from witnesses and see documentation, that can support this case,” she added.Copyright © 2020, ABC Audio. All rights reserved.