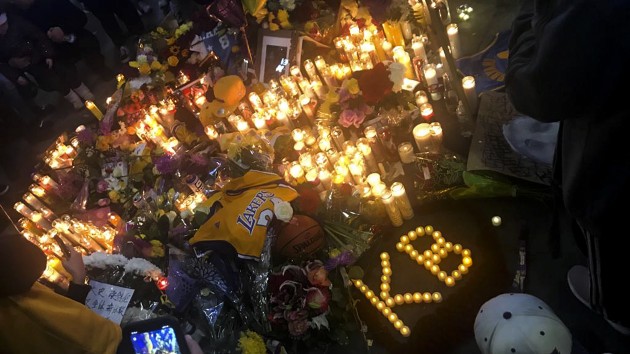 Azmi Tuncel/Anadolu Agency via Getty Images(LOS ANGELES) — Vigils are popping up around the nation as fans mourn the loss of basketball legend Kobe Bryant.Dozens of people began to gather on an intersection near the site of the crash in Calabasas Sunday afternoon, as well as at the Staples Center in downtown Los Angeles, where Bryant played for years.Devastated fans gathered around a makeshift memorial for Bryant outside the arena, mingling with those who were showing up for the Grammy Awards.”I’m literally in STAPLES Center right now. Everyone has the same look of loss right now. We’re all zombies. Surreal doesn’t even begin to describe what it feels like,” ESPN senior writer Justin Tinsley, tweeted.Others tried to catch a glimpse of the crash site, high in the Calabasas hills, cordoned off by firefighters. Nonetheless, many showed up in No. 24 jerseys hoping to pay tribute to their favorite player.In New York, the Knicks held a moment of silence for Kobe Bryant at Madison Square Garden that lasted 24 seconds, in honor of Bryant’s uniform number. The MSG crowd broke out in a loud “Kobe” chant after the 24 seconds of silence. Outside, Bryant was shown on the marquee.The Raptors and Spurs did the same before their game earlier Sunday.Flowers and a basketball have been left at a memorial outside Lower Merion High School in Ardmore, Pennsylvania, outside Philadelphia, where Bryant played basketball as a high school student before leaping straight to the NBA. The school’s gymnasium is named after Bryant.”The Lower Merion School District community is deeply saddened to learn of the sudden passing of one our most illustrious alumni, Kobe Bryant,” Amy Buckman, director of School and Community Relations for Lower Merion School District, said outside the school Sunday afternoon.Copyright © 2020, ABC Audio. All rights reserved.