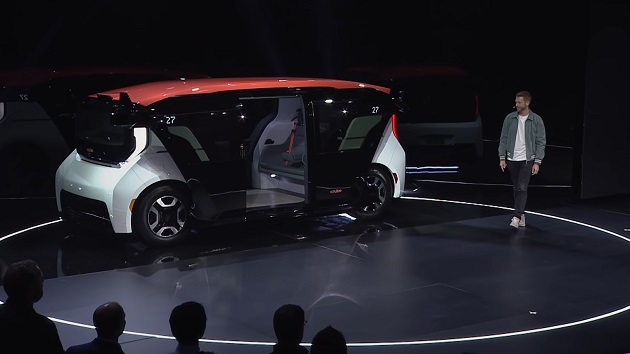 Ed Niedermeyer is an auto industry analyst and co-host of the podcast “The Autonocast,” which covers transportation technology. He says GM’s investment in driverless vehicles is significant because the company is committing to a ridesharing model.

“I think it really blurs the line… what was once a very strong line between private car and public transit.”

GM isn’t planning to sell the Cruise Origin to individual car buyers. Rather, the Cruise brand will operate a fleet of Origins within a specific city or town. Residents can order a ride on their smartphone, and then an Origin will pick them and drop them off, similar to an Uber or Lyft ride. Niedermeyer says the Origin shows signs that it was designed with this style of transportation in mind.

“If you can get past the kind of space-age looks – with its uni-directional, very unconventional appearance – the inside is actually quite a bit like a London black cab.”

The Origin can seat up to six passengers, and has no steering controls of any kind. That marks a major departure from the semi-autonomous vehicles that companies like Tesla have been testing in recent years, which are intended to be sold to the general public. Niedermeyer says this new way of thinking about autonomy is more realistic.

“What we really saw through 2015, 2016, 2017 was this sort of buildup of unsustainable hype around autonomous vehicles. Very short term goals, expectations of ubiquity in very short order. And what we’re seeing is companies like Cruise back away from those goals, and be more conservative and cagey about their future plans.”

He says the scaling back of expectations can be attributed to the shift in thinking around autonomous cars: from personal transport to public rideshares.

“The idea that self-driving cars are simply going to replace cars as we know them, and be as ubiquitous and as operable as cars are today, that’s not something that’s on the immediate radar for andybody who I think is serious in the autonomous vehicle development space.”

Production of the Cruise Origin at Detroit-Hamtramck is expected to begin in 2022.