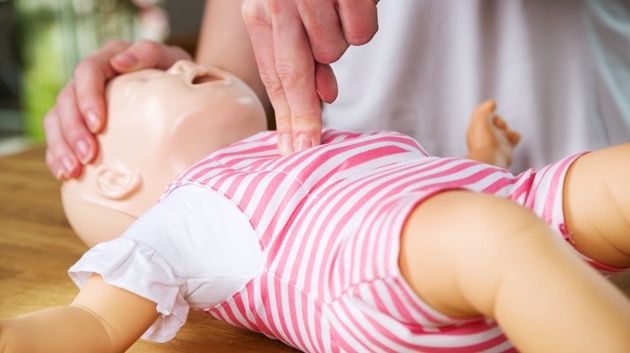 OLJensa/iStock(NEW YORK) — Say what you want about social media, but it from time to time, it saves lives.Such was the case when Shelby Dunham realized her daughter was choking.”I look over and her face was turning blue and she was trying to gasp for air but she couldn’t. She looked frantic. So in that moment, I completely panicked,” Dunham told Good Morning America. But she said suddenly, “I realized I knew what to do,” thanks to a video on Instagram from ER nurse Shannon Tripp.Tripp — a pediatric nurse and mom of four — had to save her own son, Jack, when he was just 9 months old and choked on a piece of hard candy he had accidentally gotten a hold of. Tripp gave him back blow after back blow until finally, the peppermint came shooting out.”I thought to myself, ‘What if a mom hadn’t known what to do?’ I would have lost my son,” Tripp told Good Morning America.That night, she recorded a video to teach other moms what to do if that happened to them. She now regularly shares medical tips on her Instagram account. That video was eventually seen by Dunham and 500,00 other people.”I dropped her on the ground and I did exactly what Shannon’s demonstration says to do,” Dunham said. “And within seconds it was out and she was fine. And we both just cried and I was so thankful. It was 100% because of Shannon’s highlight,” Dunham said.Signs of chokingDr. Jennifer Ashton said the first sign is bluish discoloration around the lips. “That is a critical sign that they are not getting enough oxygen,” she told GMA.Other signs: chest and ribs are pulling inward; unresponsive or unconscious; and an inability to cry.Ashton gave an overview CPR lesson that can be viewed here, but she encourages all parents to learn for themselves, saying, “It could save a life.”

The science behind the zombie fungus from ‘The Last of Us’

Eye drops recalled after 55 reports of bacterial infection, one death in 12 states

As US reels from Tyre Nichols video, what makes people act violently as a group?

How long eggs stay fresh, tips to store them and how to check if eggs are still safe to eat