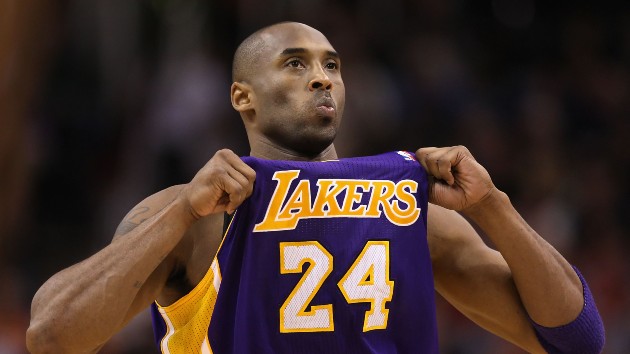 Christian Petersen/Getty Images(NEW YORK) — For a generation of basketball players, Kobe Bryant wasn’t just an icon — he was the reason they played the game at all.LeBron James, who passed Bryant for third all-time in NBA scoring over the weekend, credited Bryant with nothing short of fueling his drive to play in the league.”I was growing up in the ranks when Kobe came into the league,” James said Saturday night. “It wasn’t a dream of mine to come straight from high school at that point in time, to the NBA, but I was like, ‘Wow, a 17-, 18-year-old kid, being able to make that leap, that’s pretty damn cool.’ As I started playing more ball, and I went to high school, the things he was doing on the floor, I admired and I wanted to be a part of.”Bryant, who spent all 20 years of his NBA career with the Los Angeles Lakers, was killed, along with his 13-year-old daughter, Gianna, and seven others on Sunday when a private helicopter they were aboard crashed in Calabasas, California.He was 41 years old.Sixteen years Bryant’s junior, Joel Embiid, the All-Star center for the Philadelphia Sixers, said the Lakers star changed his life’s trajectory.”I started playing ball because of KOBE after watching the 2010 finals,” Embiid shared on Twitter. “I had never watched ball before that and that finals was the turning point of my life. I WANTED TO BE LIKE KOBE.”There were few basketball players — or athletes in general — not influenced by Bryant since the turn of the millennium.Bryant was drafted by the Charlotte Hornets 13th overall in the 1996 NBA Draft out of Lower Merion High School, outside of Philadelphia. The pick was made by the Los Angeles Lakers, who had worked out a trade for the selection prior to the draft in exchange for center Vlade Divac.He played in his first summer league game as a 17-year-old; he did not feel outclassed by the competition, however.”Watching him go to a summer league game, OK, the place was jam packed,” former Lakers general manager Jerry West, who drafted Bryant, told ABC News on Sunday night. “My son relayed a story to me just today about how he scored 29 points as a 17-year-old kid. After the game he remarked to my son, ‘Boy that was really easy."””I think because he started so young that he resonated with so many people, young kids who have hopes and dreams like he did,” West said.By his third season, Bryant was starting every game and one year later, under new head coach Phil Jackson, the Lakers were NBA champions for the first of three straight seasons.”Kobe was a chosen one — special in many ways to many people,” Jackson said in a statement Sunday. “Our relationship as coach/player transcended the norm. He went beyond the veil.”Bryant won two more championships — in 2009 and 2010.Much as the original Dream Team opened markets in Europe, Bryant was among the forebearers for the NBA’s expansion into Asia and specifically China, where he was immensely popular.The guard’s defense, rebounding and passing were all exceptional, but it was his offensive arsenal that wowed his legions of imitators — both those who would go on to play in the pros and those whose heroics were limited to driveways everywhere.Bryant ranks third in career 50-point games — behind only Wilt Chamberlain and Michael Jordan — and his 81-point game against the Toronto Raptors in January 2006 is second only to Chamberlain’s 100-point game.”The work ethic that he put into the game; he had zero flaws offensively, zero,” James said Saturday. “You backed off of him, he could shoot the 3. … You body him up a little bit, he could go around you. He could shoot the midrange, he could post, he could make free throws, he had zero flaws offensively.”Bryant finished his career with one last epic game: scoring 60 points his final game.He’ll be eligible for the Hall of Fame in 2021. Copyright © 2020, ABC Audio. All rights reserved.