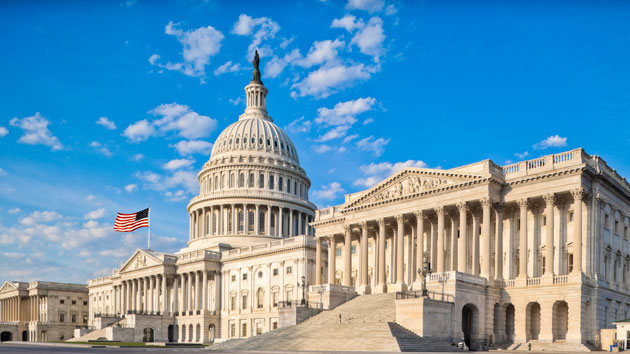 dmadig/iStock(WASHINGTON) — It was another bustling week on Capitol Hill amid the Senate impeachment trial of President Donald Trump, but both the Senate and House chambers settled into moments of peaceful reflection over the past two days following the tragic death of NBA legend Kobe Bryant.The 41-year-old basketball champion was among nine people who died in a helicopter crash in the wealthy Southern California residential neighborhood of Calabasas on Sunday. His 13-year-old daughter, Gianna, died alongside her father.

Representatives Maxine Waters and Harley Rouda delivered remarks before holding a moment of silence on the House floor in a tribute to Kobe Bryant, his daughter, Gianna, and the seven others who were killed in a devastating helicopter crash on Sunday. https://t.co/FOj481oXMy pic.twitter.com/UdOdk0lVgm

Democratic Reps. Harley Rouda and Maxine Waters led the House California delegation in a moment of silence on Tuesday afternoon and expressed their condolences to the families and communities of the victims.”We are all heartbroken by the loss of life as this week our neighbors lost parents, children, friends, coaches and heroes in a horrific accident,” Rouda said and then read the names of the victims: Kobe and Gianna Bryant, baseball coach John Altobelli, his wife, Keri, and their daughter Alyssa; mother and daughter Sarah and Payton Chester; coach Christina Mauser, and pilot Ara Zobayan.Waters represents California’s 43rd district in the southern part of Los Angeles County, which includes part of Los Angeles, while Rouda represents California’s 48th district, which is based in Orange County in southern California.”Orange County is grieving, but we will find solace and purpose in the example they left behind; in the belief in something bigger than themselves,” Rouda added. “I ask that in Orange County and across out nation, we think of the lives lost in neighborhood basketball courts, school gyms, NBA arenas and wherever the game is played.”Rouda’s remarks were followed by a tribute by Waters, who reflected on about the legacy that Bryant left behind and what he meant to the city of Los Angeles.”Celebrated as a king in Los Angeles, Kobe’s death is deeply painful for our city and his millions of fans everywhere,” Waters said. “For decades, he dazzled generations of fans and aspiring athletes, leaving a legacy as a prolific athlete, devoted husband, loving father and philanthropist that will never be forgotten.”On Monday — one day after Bryant’s death — Senate chaplain Barry Black opened the Senate impeachment trial with a prayerful reflection on the tragedy that claimed nine lives.

Senate chaplain: "As millions mourn the deaths of Kobe and Gianna Bryant and those who died with them, we think about life's brevity, uncertainty and legacy."Remind us that we all have a limited time on earth to leave the world better than we found it." https://t.co/e0q9tP2fgn pic.twitter.com/Cw20ebjBuy

“As millions mourn the deaths of Kobe and Gianna Bryant and those who died with them, we think about life’s brevity, uncertainty and legacy,” he said in the silent chamber. “Remind us that we all have a limited time on earth to leave the world better than we found it.”As National Transportation Safety Board investigators are still working to determine what brought down the helicopter, aviation safety advocates are calling for tighter protocols and regulations for helicopters. Copyright © 2020, ABC Audio. All rights reserved.