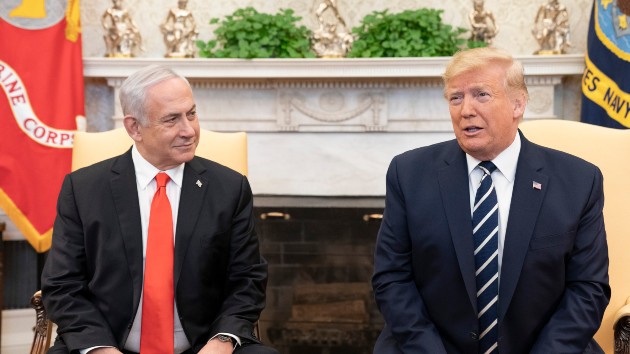 Official White House Photo by Shealah Craighead(WASHINGTON) — As the Senate impeachment trial enters its second week, the White House is locked into a split-screen reality.While the trial dwarfs all other political storylines in Washington, the administration has pushed forward with a series of events designed to showcase a president focused on his presidential agenda even as Capitol Hill remains consumed with the business of impeachment.Still, the president has made no effort to conceal that he is paying close attention to the Senate impeachment trial and frequently tweets to insist upon his innocence and blast Democrats.Last week, as the president attended the World Economic Forum in Davos, Switzerland, and met with other world leaders, administration officials lauded the president for his focus on the business of the American people.Asked about the White House messaging strategy on Fox News last week, White House press secretary Stephanie Grisham said that the president’s actions speak for themselves.”This president keeps working, this president doesn’t stop working,” Grisham said in the interview. “I don’t even think messaging is needed, you see it, he is out every day. … So he keeps working, that’s fine. They keep screaming impeachment, that’s fine.”On Friday, an administration official shared with reporters a photograph of a TV screen of coverage among cable networks titled, “Priorities.” It showed Fox News and Fox Business covering the president’s appearance at the anti-abortion “March for Life” event while CNN and MSNBC were reporting on the Senate impeachment trial.And as the trial now enters its second week, the president is set to rollout his long-awaited and long-delayed Middle East plan and celebrate his keeping a campaign promise by signing the revamped U.S.-Mexico-Canada Agreement.Monday kicked off with the hastily-arranged visit of Israeli Prime Minister Benjamin Netanyahu, as well as his chief political rival Benny Gantz, to coincide with the president’s decision to release his peace plan.The administration has previously delayed the rollout of the plan amid political uncertainties in Israel, but a source familiar with the process said the president decided within the last couple of weeks that now was the right moment to release the plan. The rationale for releasing the plan now, the official said, is based on the hope that the Israeli people will coalesce around the plan, regardless of the outcome of the election.Over the last three years of drafting, the plan has been a closely guarded document crafted under the direction of the president’s son-in-law, Jared Kusher, and has only been seen in its entirety by a handful of members of the administration.The president announced that he will unveil the plan on Tuesday at noon — timing that has the effect of maximizing potential coverage before the impeachment trial gavels back into session at 1 p.m. It provides the White House with another example of television coverage split between the impeachment that the president has decried as a “hoax” and a major presidential announcement.The rollout also comes just weeks before a critical legislative election in Israel, but the administration denies that the plan’s release is any way intended to be a political gift to Netanyahu, with a senior official pointing to Gantz’s invitation to the White House to counter the criticism.On Wednesday, the president is set to celebrate one of his biggest policy achievements with the signing of the USMCA trade plan to replace the North American Free Trade Agreement, or NAFTA, the preceding trilateral trade agreement that Trump has long assailed as “the worst trade deal ever made.” The new agreement has now been ratified by both the United States and Mexico, with Canada expected to follow suit in the coming weeks.He’s also set to hit the road on Thursday to tout the trade achievement with a trip to a manufacturing plant in Warren, Michigan.The president has two campaign rallies planned this week that will provide him with opportunities to openly vent his frustrations before two audiences of adoring fans. His Thursday rally in Des Moines, Iowa, will insert himself directly into the conversation ahead of the first-in-the-nation caucuses.While it’s unclear if the impeachment trial will continue into next week, the president indicated last week that he is not inclined to delay his plans to deliver the State of the Union address on Feb. 4.If Trump is faced with delivering the annual presidential address amid the backdrop of an ongoing impeachment trial, he would become the second president to embrace that particular split-screen moment. President Bill Clinton delivered his 1999 State of the Union address amid his own impeachment trial. Copyright © 2020, ABC Audio. All rights reserved.