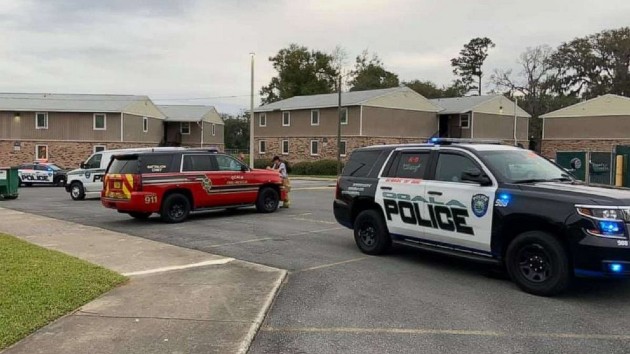 Ocala Police Department(ORLANDO, Fla.) — A 9-year-old boy has been arrested and charged with attempted first-degree murder after allegedly stabbing his 5-year-old sister multiple times.Authorities in Ocala, Florida, responded to an apartment complex at around 4:20 p.m. Monday to reports of a stabbing involving juveniles inside one of the units, according to ABC News’ Orlando affiliate WFTV.“Units are currently on scene at Berkeley Point Apartments working a stabbing investigation involving juveniles,” the Ocala Police Department confirmed on Facebook.Once police arrived, they discovered a 5-year-old victim with multiple stab wounds inside the apartment where they lived but no sign of a suspect. The victim was allegedly alert and able to communicate with authorities when they found her, according to WFTV.Her brother was discovered a short time later hiding close by in a maintenance shed.The 5-year-old girl was airlifted to a nearby hospital where she is currently being treated for stab wounds suffered in the incident.“The juvenile suspect is in custody and juvenile victim has been air lifted to a nearby hospital,” Ocala authorities said in their statement. “The scene is currently blocked off and secured as a Major Crimes Detectives continue to process and interview.”The 9-year-old boy was then arrested and charged with attempted first-degree murder, according to WFTV, which cited a news release from the Ocala Police Department.The condition of the 5-year-old girl is not immediately known. Copyright © 2020, ABC Audio. All rights reserved.

5 migrants dead, 5 missing after boat capsizes off coast of Florida