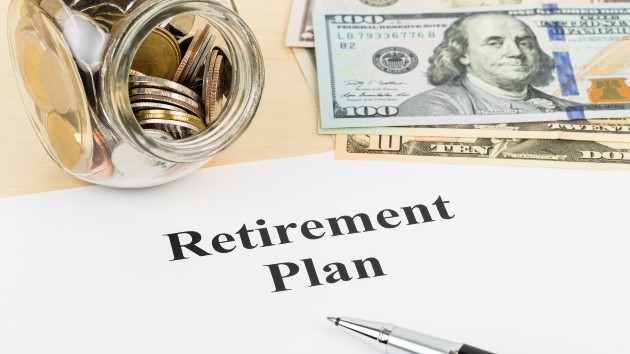 Casper1774Studio/iStock(NEW YORK) — As early as Jillian Johnsrud could remember, putting her money into a savings was something she knew she had to do to gain financial freedom.Growing up under challenging circumstances, Johnsrud started saving to have options and to do the things she wanted to.“It didn’t feel like we had any options,” Johnsrud told ABC News’ Good Morning America. “So I started saving money and started working side jobs after school.”As a teen in high school, Johnsrud said she was able to save $5 to $20 dollars at a time and that it amounted to $8,000 by the time she graduated.“It was almost as much as what my parents made in a year,” she said. “It’s like almost a whole year salary.”By the time she married her husband, Adam Johnsrud, at 19, the two shared common goals: adopt children and pay off their debt.They were able to do both after learning how to flex their finances and save.

Extreme tradeoffsBetween the two, the couple had $55,000 worth of debt from having two loans, credit cards and medical bills.“I really liked the idea of paying off our debt,” said Jillian Johnsrud. “I really wanted to have more financial freedom. And that was just a really simple rule. I think the logic at the time was if we decided to have kids or if one of us wanted to stay home at some point, we’ll just have more flexibility.”So, as a team, Jillian and Adam Johnsrud started making some serious trade offs to cut back on spending and save money.In the first year of their financial journey, the Johnsruds were in their early 20s and still in their first year of college. Instead of paying for student housing, the couple opted for a camper.After college graduation, Adam Johnsrud joined the military and they moved to Washington, D.C. The couple, who had two kids at the time, shared a home with a housemate to cut back on living expenses, which ultimately helped them save an extra $25,000 during the time they lived there.The Johnsruds drove an old Honda Civic that they bought from a friend who didn’t want it anymore.In terms of food, they developed “Rice and Bean Monday,” which involved learning a new rice and bean dish. In the end, Jillian Johnsrud said she came up with about 100 recipes.Jillian and Adam Johnsrud also employed a dollar-a-pound rule, meaning they leaned heavily on foods that cost a dollar or less per pound.“We had to be really, really mindful about what was important to us,” said Jillian. “We asked ourselves what we really cared about and what we really valued.”At the time, Jillian and Adam Johnsrud were doing what many who follow the FIRE method do today to gain financial freedom.The method, which stands for “Financial Independence, Retire Early,” works by maximizing savings and generating passive income so that your money works for you. The goal is to save and invest very aggressively, which is what the Johnsruds did in all aspects of living.For those who follow the practice, it all comes down to what you can save. One of the ways the Johnsruds were able to do that was by automating savings and setting savings goals.

Keeping each other in lineJillian and Adam Johnsrud’s strict savings didn’t come without its challenges. Family and friends questioned if their decision was the best move for their family, Jillian Johnsrud said.“It was subtle teasing,” she said. “We weren’t buying new cars, we weren’t going out to eat for lunch and nobody understood. Nobody got it. Nobody saw the kind of vision that we had.”But despite the criticism, Jillian and Adam Johnsrud constantly reminded each other about their ultimate financial goals and looked toward the bigger picture.“It was really an intentional practice of casting a vision of what we really wanted life to look like. What was our ideal day, who did we want to be as people, what kinds of things did we want to do, what did we want our legacy to feel like,” Jillian Johnsrud explained.In the end, the Johnsruds’ disciplined financial mindset paid off. They not only paid off all their debt but they saved thousands of dollars, growing their savings from $10,000 to $100,000 in just a few years.Jillian Johnsrud said reaching this goal meant a lot considering her financial background when she was younger.“Saving our first $100,000 blew my mind,” said Jillian Johnsrud. “That was so much more money than I had ever [had] growing up. Paying off debt was amazing and that first $100,000 was just life changing. That was the options and the freedom that I really craved when I was in junior high. That moment felt like it had come to fruition and that I had done it. I had given myself freedom, options and security.”With the money that they had saved and the debt they had paid off, the Johnsruds were also given the option to retire early when Jillian Johnsrud became pregnant with her fifth child at 32. The couple decided to experiment and ended up taking a year off work.Now, between the both of them, they’re able to pursue what they want due to financial independence. Jillian Johnsrud, now 37, writes during her spare time and their family is able to go on the trips they’ve dreamed of.Jillian Johnsrud helps others attain a financially independent life with her website.“One of the reasons that I’m really passionate about sharing our story and giving people more examples and context is because I just didn’t have that,” she said. “If I could have convinced all of my friends when I was 20 to go down the same path, all of my friends would be financially independent and we could also do these fun, crazy adventures together.”Want to follow Jillian Johnsrud’s footsteps to financial independence? She breaks it down in three steps:1. Figure out your gap numberJillian Johnsrud explains that your gap number is calculated by how much you are earning and how much you are spending. In other words, it’s the gap between your calculated expenses in retirement and the amount you expect to earn through your fixed income.On her website, Jillian Johnsrud breaks it down with several examples — one being that if you earn $4,000 a month and spend about $3,800 in either rent, groceries or other expenses each month, then you have a $200 gap. The goal is to increase that number.2. Grow the gapOnce that number is generated, try to grow that gap number every month by figuring out the opportunities that you have to expand it. Do things like renegotiating your cellphone bill or eating more low-cost meals. It can also mean negotiating a raise or taking on extra hours at work.On her website, Jillian Johnsrud said that she was able to grow her gap number by cutting back on fixed expenses like renegotiating her gym membership, reducing costs on groceries and even trying to live without a cellphone. Other ways to do it would also be to make payments toward any debt you have like medical bills or credit cards.“Just focus on that one number, whether it’s a hundred bucks a month or 1,000 or 10,000,” explained Jillian Johnsrud. “Just focus every single month on trying to grow that number.”3. Guard the gapThe final step from Jillian Johnsrud is to guard that gap number, which she describes as the challenging part and will take “emotional strength and vision.”Ways to guard that gap number include putting it toward a high interest debt or starting to invest in stock index funds or real estate to help grow future income. Another way to guard the gap is to build an emergency fund or save for large purchases.Copyright © 2020, ABC Audio. All rights reserved.

Why the job market is booming despite high-profile layoffs