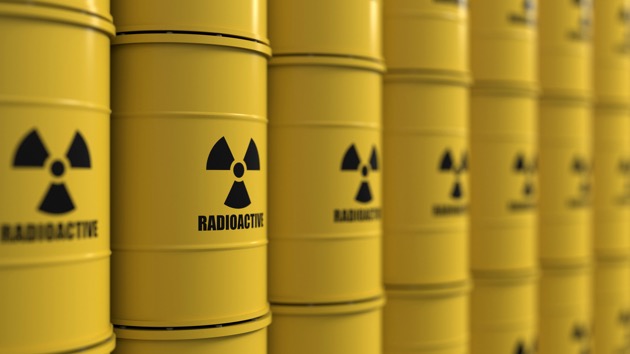 Jumbo2010/iStock(COLUMBUS, Ohio) — The current model the U.S. and other countries plan to use to store high-level nuclear waste may not be as safe as previously thought.The materials used to store the waste “will likely degrade faster than anyone previously knew” because of the way the materials interact, according to research published Tuesday in the journal Nature Materials.The research, funded by the U.S. Department of Energy Office of Science, focused primarily on defense waste, the legacy of past nuclear arms production, which is highly radioactive, according to a press release from Ohio State University. Some of waste has a half-life — the time needed for half the material to decay — of about 30 years. But others, such as plutonium, have a half-life that can be in the tens of thousands of years, according to the release.The plan the U.S. has for the waste is to immobilize long-lived radionuclides — mixed with other materials to form glass or ceramic forms of the waste — in steel canisters and then dispose of them by burying them in a repository deep underground, according to the study. Countries around the globe largely store and dispose of the nuclear waste in a similar fashion.However, scientists found that under simulated conditions, corrosion of the containers could be “significantly accelerated,” which had not been considered in current safety and performance assessment models. The newly formed glass or ceramic compounds, confined in the steel containers, have been observed corroding those containers at surprising rates due to new chemical reactions.The reactions significantly altered both the waste and the metallic canisters, according to the research. Xiaolei Guo, lead author of the study and deputy director of Ohio State University’s Center for Performance and Design of Nuclear Waste Forms and Containers, described the corrosion as “severe.””In the real-life scenario, the glass or ceramic waste forms would be in close contact with stainless steel canisters. Under specific conditions, the corrosion of stainless steel will go crazy,” he said in a statement. “It creates a super-aggressive environment that can corrode surrounding materials.”The researchers warned that the interaction between the materials, which then impact the service life of the nuclear waste, should be “carefully considered” when evaluating the performance of the waste forms. A more compatible barrier should be selected to optimize the performance of the repository system.”This indicates that the current models may not be sufficient to keep this waste safely stored,” Guo said. “And it shows that we need to develop a new model for storing nuclear waste.”The waste is typically stored where it is produced, according to the U.S. Government Accountability Office.The Environmental Protection Agency has proposed that the waste be disposed in a deep geological repository in the Yucca Mountains in Nevada. However, those plans have been stalled since 2009.Copyright © 2020, ABC Audio. All rights reserved.