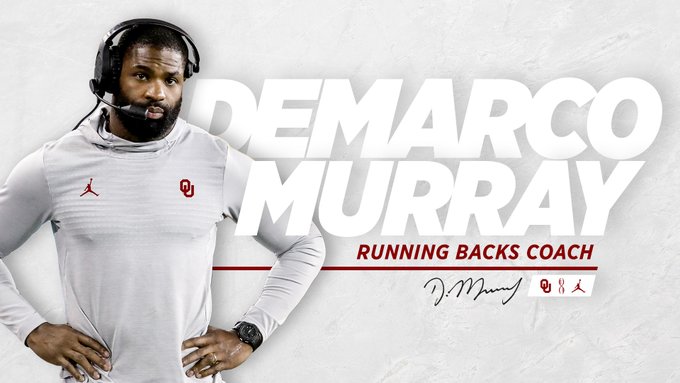 Murray is Oklahoma’s all-time leader in purpose yards and touchdowns. During his time at Oklahoma, Murray finished with 3,685 career rushing yards with 50 touchdowns, 157 career catches with 13 touchdowns, and 1,462 kickoff return yards with two touchdowns

“This is a really exciting day, being able to welcome one of our program’s all-time best players back to Norman,” said Head Coach Lincoln Riley. “DeMarco had a tremendous playing career both at OU and in the NFL and has a passion for coaching and helping young men grow as players and people. He’s got an incredibly bright coaching future and will be an outstanding mentor to our players. I don’t think there’s anyone better to lead our running backs. Everyone in our program is excited to have DeMarco, his wife Heidi and their children as part of our family.”

Murray had a terrific career early on in the NFL during his seven-year run. He was drafted by the Dallas Cowboys in 2011. His best season came in 2014 with the Cowboys where he accounted for 1,845 rushing yards and 13 touchdowns. After his four years in Dallas, Murray spent one season with the Philadelphia Eagles and two seasons with the Tennessee Titans before ultimately retiring.