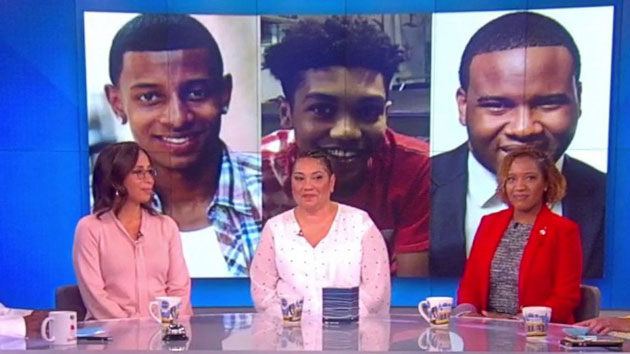 ABC(NEW YORK) — Angela Henry, Michelle Kenney and Alissa Findley all have one thing in common: young and unarmed black men in their families were shot and killed by police officers.The three heartbroken family members, who said they have police in their families, shared their stories on “The View” Tuesday and explained why they decided to join the NFL and Jay-Z’s Roc Nation for its “Inspire Change” initiative.Their decision to join comes after the the NFL unveiled an emotional public service announcement as part of its partnership with Roc Nation centered around the story of Botham Jean, Findley’s brother.Jean was 26 years old when he was killed in his own Dallas apartment by off-duty police officer Amber Guyger on Sept. 6, 2018. Guyger was returning home after work that night when she claimed she had mistaken Jean’s apartment for her’s and thought he was a burglar, subsequently shooting him.”The View” co-host Sunny Hostin brought up former 49ers quarterback Colin Kaepernick, who stirred up controversy when he began protesting police shootings by taking a knee during the national anthem and hasn’t played a professional game since 2016. Hostin asked the families if they felt the NFL was taking on this initiative to “give themselves cover” after Kaepernick alleged in a grievance that league owners colluded to ensure he remains unsigned. The lawsuit was settled in February 2019.”I think they’re using good families to do it,” Hostin added. “How do you respond to that?””I’m a Kaepernick fanatic,” said Kenney, the mother of Antwon Rose Jr., who was shot by a police officer in 2018. “I was a Kap fan way before he took the knee, and I will forever be grateful for him opening this conversation.””But Antwon is my son, so when you get a call from Roc Nation and the NFL and they say, we want to take your platform to the next level, we don’t want anything from you, and we have a plan, I have to remember that Antwon is my son,” Kenney continued. “So I’m all in.”Rose, 17, was shot three times in the back by a rookie police officer while running away during a traffic stop in East Pittsburgh, Pennsylvania, on June 19, 2018. The officer, Michael Rosfeld, was found not guilty of homicide for the shooting death of Rose. Kenney said the verdict “wasn’t a surprise for her.””I was more concerned with my daughter and my family members, but I totally understand how the system works and I wasn’t shocked at all,” Kenney said on “The View” Tuesday. “I held that close to the vest, though, because I wanted to protect my daughter and my mother, but I wasn’t surprised. It’s the way the system works.”Angela Henry, the mother of Danroy “Danny” Henry, who was shot and killed by a police officer on Oct. 17, 2010, while sitting a in car after celebrating a college football game in Mount Pleasant, New York, told “The View” her and Kaepernick are both trying to spread awareness of police brutality.”We’re doing the same thing, and with the reach of both the NFL and Roc Nation, and being here on ‘The View,’ we’re reaching even more people that may not know our stories,” Angela Henry said, “and now they do.”Of her son’s death, she said that she was “grateful” that another officer who was there on the night of her son’s fatal shooting came forward to tell her what happened.”[Danroy] was told to move. He was in a fire lane and the police officer tapped on his window and asked him to move,” Henry said the officer told her.She said he also told her that the officer who shot her son said he “thought he heard someone say ‘stop"” before shooting Danroy Henry in the car.”The other police officer came forward and said that the only threat that night was the officer that killed our son,” Henry said. “Our son wasn’t doing anything wrong. He wasn’t speeding. He wasn’t disobeying an order.”Findley, meanwhile, said the partnership with the NFL and Roc Nation is the next step in an ongoing conversation.”I look at it as Kaepernick started the conversation, and with Roc Nation and the NFL, they’re now taking another step,” Findley said. “It doesn’t end here with Roc Nation and the NFL. We’re looking for anyone with a platform to keep this conversation going so that we can come up with the resolution.”Findley also spoke about the moment she learned her brother had died. After Jean was rushed to a hospital, she said a social worker called her to ask her to identify a body that could be her brother’s.”I asked her, ‘Is he alive?’ And she said, ‘I’m sorry to have to tell you, he succumbed to his injuries,"” Findley said. “At that point I was in shock.”The three family members also had a chance to sit down with NFL commissioner Roger Goodell. They spoke highly about their time together while he listened to their stories.”You can’t fake empathy, especially when you’re a parent,” Kenney said of Goodell. “I watched his facial gestures. I listened to every word he said. He cried when I cried. He didn’t rush us. He didn’t ask us to leave. He was the kindest man.””That man — that man shed tears for my son,” Kenney added.”It’s an opportunity that we had to share personally our stories with him because maybe he hears them from a distance,” Angela Henry said. “But this is a chance for him to meet the families, and truly get to know us and understand what we’re trying to do.” Copyright © 2020, ABC Audio. All rights reserved.