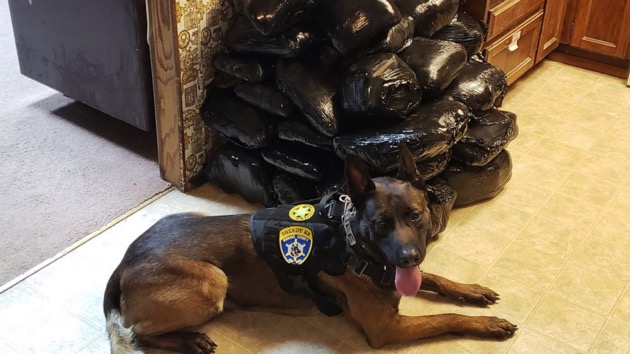 Arizona Department of Public Safety(MESQUITE, Nev.) — Authorities in Arizona seized nearly 400 pounds of methamphetamine during a traffic stop over the weekend, officials said.A trooper with the Arizona Department of Public Safety pulled a vehicle over Friday for a traffic violation on Interstate 15, just south of Littlefield near the Arizona-Nevada border, Sgt. Kameron Lee, a spokesperson for AZDPS, told ABC News.During the stop, the trooper realized something was amiss and requested assistance from the Mohave County Sheriff’s Office, which brought along its K9 named Brutus. Lee said he could not go into details as to why assistance was requested.When Brutus arrived, he alerted authorities to drugs and 362 pounds of methamphetamine — with an estimated street value of $4.1 million — was subsequently found, according to AZDPS.It was the largest meth seizure in AZDPS history, the agency said.The driver and passenger of the car, identified by police as 52-year-old Julie Jeannie Mason, of Iowa, and 38-year-old Maurius Montez Mason, of Illinois, were arrested for possession of a dangerous drug and transportation of a dangerous drug.They were booked into the Mesquite Detention Center in Mesquite, Nev.It was not immediately clear if the Masons, who are husband and wife, obtained legal representation. Copyright © 2020, ABC Audio. All rights reserved.