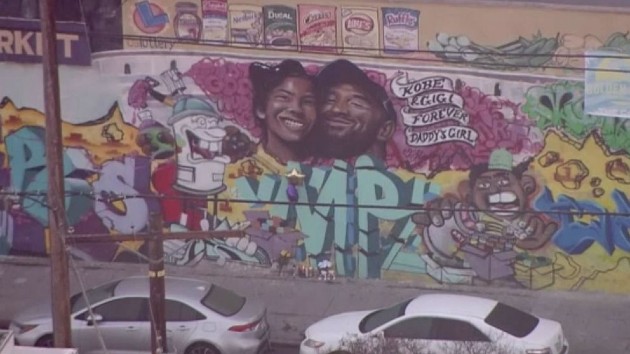 KABC-TV(LOS ANGELES) — Los Angeles has a new mural to honor basketball legend Kobe Bryant and his 13-year-old daughter, Gianna, who died with seven others in a helicopter crash on Sunday.As tributes and memorials pour in from all over the world for the former Los Angeles Lakers star, a mural dedicated to the father and daughter has already gone up in the Mid-City neighborhood of Los Angeles, according to ABC News station KGO-TV.Bryant, 41, and his daughter were painted less than 24-hours after their deaths. The mural shows them smiling cheek-to-cheek with black script over a white ribbon that reads, “Kobe & Gigi Forever. Daddy’s Girl.”Bryant and those who died in the crash were flying from Orange County, where Bryant has a home in Newport Park, to the Mamba Sports Academy in Thousand Oaks, where Bryant hosted basketball clinics. Bryant’s daughter’s basketball team was scheduled to play in the Mamba Cup, a youth basketball tournament that’s named after Bryant’s moniker.Los Angeles Mayor Eric Garcetti described Bryant in a statement as a “giant who inspired, amazed and thrilled people everywhere with his incomparable skill on the court — and awed us with his intellect and humility as father, husband, creative genius and ambassador for the game he loved.””He will live forever in the heart of Los Angeles, and will be remembered through the ages as one of our greatest heroes,” Garcetti said. “This is a moment that leaves us struggling to find words that express the magnitude of shock and sorrow we are all feeling right now, and I am keeping Kobe’s entire family in my prayers at this time of unimaginable grief.”Other victims killed in the crash included John Altobelli, a local college baseball coach, as well as his wife, Kerri Altobelli, and his daughter, Alyssa Altobelli. Christina Mauser, an assistant girls basketball coach for a private school in Orange County, was also killed in the crash, her husband confirmed on Facebook.Two other people aboard the doomed flight were identified as Sarah and Peyton Chester, ABC News has confirmed.The identity of the one other victim, the pilot, remains unconfirmed.Bryant is survived by his wife Vanessa, and three daughters, Natalia, Bianca and Capri. Copyright © 2020, ABC Audio. All rights reserved.