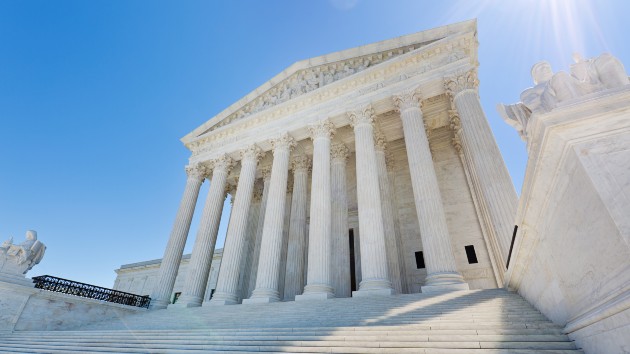 YinYang/iStock(WASHINGTON) — The Supreme Court issued an order Monday to temporarily allow a Trump administration rule that would deny certain immigrants legal status in the U.S. if they failed to meet new standards proving they won’t rely too heavily on public benefits.The 5-4 decision, made by the court’s conservative majority, means the rule is permitted to continue until a lower court makes a determination.The rule requires immigration officials to assess factors including an applicant’s age, health and assets, while expanding the list of off-limits public services to include Medicaid, food stamps and housing subsidies.Pregnant women, children, refugees, asylum seekers and certain members of the military are generally exempt.Under a separate administration move last week, pregnant women attempting to enter the country are now facing more scrutiny and could have their visas denied if immigration officers find they’re traveling to have a child on U.S. soil.The rule that the Supreme Court is temporarily allowing is expected to have a broad impact on those applying for permanent legal status in the U.S. An analysis from the Migration Policy Institute last year found 70% of recent green card applicants would have been impacted had the rule been implemented earlier.White House press secretary Stephanie Grisham praised the high court’s decision in a statement Monday.”Today’s stay from the Supreme Court is a massive win for American taxpayers, American workers, and the American Constitution,” Grisham said. “This decision allows the Government to implement regulations effectuating longstanding Federal law that newcomers to this country must be financially self-sufficient and not a “public charge” on our country and its citizens.”But backlash from civil rights advocates decrying the imminent implementation of the policy was swift.”The public charge rule is yet another attack on immigrant communities and is especially harmful for survivors of gender-based violence who are subject to the rule,” said Irena Sullivan, a senior attorney at the Tahirih Justice Center, a group that advocates for trafficking victims. “Abusers commonly use threats of violence and deportation to keep survivors economically dependent on them and to prevent them from escaping.”Claudia Center, a senior staff attorney with the ACLU’s Disability Rights Program, claimed the rule was designed to intentionally hurt immigrants and those in need of specialized care.”It enshrines the false stereotype that people with disabilities do not contribute to our society,” Center said in a statement. “Families will suffer. Congress has repeatedly declared that disability discrimination violates federal law. This rule must be stopped.”Immigrant communities were rattled when the rule was first announced last spring. Many worried it could impact U.S. citizen children if parents decided not to use public services out of fear their green card applications would be denied.A University of California San Diego study released last August found undocumented immigrants were much less likely to seek out emergency health care after hearing about the public charge rule.Following the Supreme Court’s decision, immigrant advocates and legal analysts were quick to encourage those who believe they may be affected to seek out legal resources, noting the complex web of policy alterations made by the new rule should be navigated on a case-by-case basis. Copyright © 2020, ABC Audio. All rights reserved.